As I prepared for the Spartan Race, I needed to be honest with myself. No one likes to confront their weaknesses or even think about them. My body was an experiment, constantly changing variables in an effort to yield optimal force output while being able to endure the five-mile race. I had no manual to follow, no coach to guide me. It was sheer motivation that carried me through the journey of preparing for this event.

When I was fifteen, there was no sport that enticed me or that I could compete in; my size–or lack thereof–restricted me from enjoying even the most simple athletic endeavors. One night, when most of my friends were out at sports practice, I was in my dormitory and found a YouTube video of a boy, similar to my stature, who transformed his body over a three year period. At that point, I no longer felt alone and weak, rather I felt empowered.

The inspiration consumed me, planting a vision in my mind that I could lead a healthier, more fulfilling life through personal fitness. I began teaching myself about weightlifting, biomechanics, and rudimentary sports nutrition, and how exercise benefits not only the body but the mind as well. Initially, I acquired the majority of my information through fitness forums and videos. As my level of competency increased, I began to read published research papers and textbooks. Each new piece of information brought me closer to reaching that goal of transforming my life. I soon began to test my knowledge in the weight room. I began to program workouts based off of my goals.

I found joy in the pain that came with training. Fatigue was immediate feedback that told me I was working hard. Since I had no scoreboard to look at, I frequently looked at the sweat rising from my calloused palms to reassure myself that I was doing my job. Discipline was paramount in my regimen. I took days off only when my body told me to. Repetition by repetition, set by set, I could feel myself growing into a bigger, healthier person.

The hypertrophic improvements were no longer the immediate objective of my training. Instead, I learned lessons, such as hard work, resilience, and discipline through each exercise. Such persistence translated into the classroom and other hobbies, transforming me into a better, harder worker. Spending hours at my desk no longer became problematic, for I learned to treat education as I would fitness: as an investment. I also adopted other habits from this mindset such as beginning to read regularly, for the mind must be trained as hard as the body. The most important thing that I learned was how to deal with the difficult and the unexpected; the only way to elevate myself was through hard work and persistence, no matter the goal.

As time inched closer to the starting date of the race, I reflected on the journey I had started years ago. During that time, I had gained forty pounds of lean mass and improved my mile time by 115 seconds. Such accomplishments may be expected of a natural-born athlete, but for me, it felt as if I was taking on the world. The growth not only manifested itself physically but mentally too. I found myself being more confident, eager and outgoing as I no longer felt insignificant.

I had never been so excited to wake up at 5:45 AM. I placed 169th out of 5000 racers and second in my age group. However, the race was not the highlight of my journey. Yes, the finish was rewarding, but seeing how I transformed myself and realizing what I am capable of will inspire me well into the future. I chose to embark on this journey, not to impress others, but rather to prove to myself that I am capable of doing it. 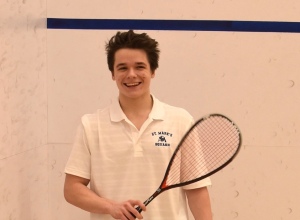 Jack Eames is a VI Form boarding student from Andover, MA. He enjoys skiing, playing squash, and spending time with his family.