Competing in the FIRST Robotics Challenge

Competing in the FIRST Robotics Challenge 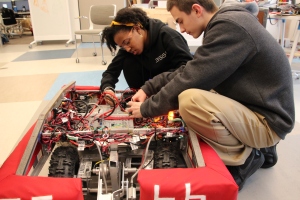 Working in the basement level of the STEM building, using lots of power tools, and occasionally throwing out words like “kickoff,” “drivetrain,” or “STEAMworks,” we are FIRST team 3566, also known as Gone Fishin’.

Gone Fishin’ competes in the FIRST Robotics Competition. FIRST stands for “For Inspiration and Recognition of Science and Technology.” The robotics competition, open to any high school student, was created in order to promote the STEM fields and offer a competitive yet collaborative atmosphere for robotics. In the FIRST Robotics Competition (FRC), teams are given a challenge, in the form of a game, and then have six weeks to build a 120 pound, $10,000 robot to meet this challenge. After those six weeks are up, teams compete in various regional events. The ultimate goal is to go to the world championship, held in St. Louis, where around 800 teams gather to play the game.

Now, in our seventh year as a team, Gone Fishin’ has a current total of 39 team members, with 21 of those team members taking an ACE for robotics. We also have four teachers who mentor the team: Mr. Wells, Mrs. Brown, Mr. Roche, and Mr. Battis. In addition to our mentors from St. Mark’s, once or twice a week, current industry professionals join the team for a practice to offer advice and assistance with our designs. We are one of the smallest teams to compete, but we make up for our size by having every team member be versatile and able to work in several different areas of the team. Some of the team works on building the physical robot, while others work on coding and wiring it, and still others reach out to sponsors and work the team’s social media. Although most members of the team have a main area that they focus on, everyone can switch between at least two, if not all three groups. We work on helping each other as teammates to build the skills necessary for this required versatility.

To prepare for the upcoming season, the team has chosen three projects to focus on. In order to train the new students and practice our skills, we are building two drivetrains, which hold the wheels, motors, and electronics of the robot. We will most likely use one of these drivetrains during the season, so this project will save us time that we can use later to refine our robot.

The name of the challenge this year has been announced, and it will be called FIRST STEAMworks. Because of the emphasis on the word STEAM, the challenge will require or recommend an air-related component, possibly even a pneumatics system. In order to prepare for this, some members of the team are building a working-pneumatics board that we will be able to put directly onto our robot during the season, if necessary. Another group within the team is refining a vision system for the robot. It’s much harder to drive the robot when the driver can’t see where they’re going, and it’s almost worse when the driver has unreliable vision. Hopefully, the camera system that is currently being worked on will be reusable for years to come.

All the work we have done up until this point is only based on speculation, so some parts may have to be thrown out, while other parts become critical to the success of the robot. Yet, on January 8th, we learned of FIRST’s official competition:

The game has just been revealed, and it has exceeded all of our expectations! The goal of the game is to prepare an airship for launch, and teams do that by loading “fuel” (oversized Wiffle balls), putting giant gears in place to turn motors, and climbing almost five feet in the air to hang down from the ship. It’s clear that we’re going to have to put in a lot of work, but the game is a lot of fun and we’re looking forward to playing it!

The first few days will be spent brainstorming and testing out ideas to see if they could work within the rules of the game. After we have a solid plan, our work truly begins, as we have to build, test, program, and practice with the robot all in six short weeks. Robotics demands high energy and long hours, but we have lots of fun and grow closer as a team every afternoon that we spend working.

Kate Sotir is a VI form boarding student from Waltham, MA. Kate lives in Theriot, plays soccer and is a member of the robotics team.