By Charlie Sellers, Head of the Modern Languages Department

I had a very busy summer vacation. It was also a phenomenal summer full of adventure and self- 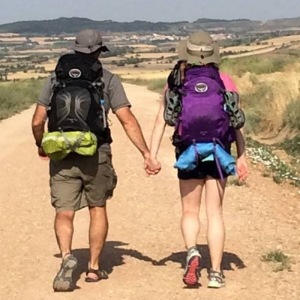 discovery. A day after finishing my end of the year duties at St. Mark’s –advisee letters, grades, comments, and faculty meetings– I left for China with 10 St. Markers and our former Chinese teacher, Showjean Wu. After two weeks in Beijing at our partner school, I was back in the States. My wife and I were moving from the house across from the thirds’ soccer field to a bigger house at the end of the thirds’ soccer field, and I needed to pack. My wife, Michaela, was busy finishing up classes and end of the year events –she teaches 5th grade at a public school in Sharon, Massachusetts– and we had another big adventure planned for the day after she finished classes. We were about to embark on an 800-kilometer (about 500-miles, a little longer than the distance from Southborough to Washington, D.C.) hike across Northern Spain called the Camino de Santiago, also known in English as the Way of St. James. The Camino (as we have referred since beginning our planning, training, and multiple trips to REI for the correct backpacks and hiking boots last spring) is a pilgrimage, a search of spiritual significance, to the remains of Santiago el Apóstol (St. James the Apostle) in Northwestern region of Spain called Galicia. It has existed since the Middle Ages.

In this article, I’d like to reflect on these summer experiences in China and Spain (and then in Southborough) and share three lessons that I learned this summer.

Phase 1: I will start with the trip that I chaperoned with Mrs. Wu to China. We traveled with 10 St. Markers –Sean Kim, Gabriel Xu (who lives in Beijing and went to our partner school, Beijing Experimental, and helped us organize the trip), Amanda Christy, Joey Smith, Jay Harrison, Shep Greene, Nick Hallal, Robert Duffy, Justin Langway, Rachel Hwang, Eun Soo Koh, and Mo Liu (who also studied at Beijing Experimental and also helped us translate).

We had an amazing experience in China. We took language classes, sang songs in Chinese, and jumped rope with seventh graders. Gabriel Xu arranged for a middle school from a less economically privileged area outside of the city to stay at Beijing Experimental with us and to also host us at their school for a day. We were treated with incredible hospitality at both Beijing Experimental and the middle school outside of the city, where students performed for us, learned about our life at St. Mark’s in a presentation that our students put together, and challenged us to a basketball game, which was well attended by everyone at the school. I ate incredibly well the whole time, and the teachers both at Beijing Experimental and the middle school kept complementing me on my incredible ability with chop sticks, so I just kept on eating more and more.

We did art projects, tried Chinese calligraphy, created 3D printing, visited the Bird’s Nest (the Beijing National Stadium), climbed the Great Wall, took Kung Fu classes, and met up with St. Mark’s alum Jonathan Qu and Stephen Li, who were both in Beijing for the summer with their families.

Phase 2: My wife and I started in southern France in St. Jean Pied de Port, a small village in the Basque region. When we arrived, it was beautiful and sunny. When we woke up in our sleeping bags the next day, it was cold and rainy. Many believe that this first day is the hardest of the Camino since it is mostly uphill, and it is twenty-seven kilometers (a little less than seventeen miles) and seven to nine hours to the next stop. After about four hours, we began to near the summit. I thought to myself, “If God could just lift these clouds, we’d have spectacular views,” and it was like magic, the clouds began to lift, and I saw the bluest clouds that I’ve ever seen. In fact, it almost felt like we were on top of the clouds.

Again, like China, I just saw amazing things and had awesome experiences: fields of sunflowers; big cows, sheep, and horses; castles; incredible views, Cathedrals, and sunrises. Some things will forever stick out from these experiences: sharing a tortilla de patatas (Spanish omelette) sandwich with a friend we made from Italy, making up songs and nicknames for pilgrims that we passed or passed us during our thirty day trek, and breaking up our hike for picnics that we would put together while trying to cure blisters and sore muscles. We hiked up and down steep mountains, but we also spent a week hiking through the infamous meseta, a large flat plateau that was covered in brown wheat fields for about as far as our eyes could see.

Here is the main lesson that I learned on the Camino. I had the chance to hike the Camino, which has always been my dream. I have had a life long love affair with just about everything Spanish: poetry, flamenco, the different regions (Galicia, Cataluña, and the Basque Country), and the food. As a Spanish teacher and the Head of the Modern Languages Department, I was also very happy to have the chance to speak Spanish everyday. However, when we started, I was off to the races and for the first half of the Camino, Michaela only had a view of my backpack: she was always about thirty steps behind me. As I continued on the Camino, I realized that my love affair with Spain is a far distant runner up to the love that I have for my wife. Even though I was propelled by my enthusiasm in the first couple of weeks of the Camino and my wife frequently had to catch up with me, we finished hand in hand. I could not have done it without her. Arriving in Santiago meant so much because we had endured the hardships of the Camino and earned the reward of having finished the hike together.

Phase 3: We arrived back at our new house on a Saturday. St. Mark’s had done us the favor of moving all of our boxes and belonging into our new place. We began to unpack on Sunday morning, and the next day it was time for Church and neither of us felt like going, but, just like the hard days on the Camino, we got up and went. We arrived late, but in time to hear a priest speak from Africa who is the pastor for twenty different parishes in a hundred mile radius. He told a story about how in the middle of a mass that he was saying two women approached the altar and asked him to deliver a baby. His immediate thought was, I am a priest, not a doctor, but he prayed, “God, make me a rock star.” And, sure enough, he was able to deliver the baby and get it to the hospital.

For some reason, that last lesson really stuck with me. Since starting school in September, whenever I do not feel like doing something, I say to myself, “God, make me a rock star,” and I have been using it in many different aspects of my life. I think that these experiences –in China and in Spain– have truly helped me see the amazing things that life and work have in store for me and have given the ability to be like a “rock star” for many people, including my students, my family, and my wife. The trip to the Beijing Experimental School and the trek to Santiago have set me up for greatness. I truly think that I am on the verge of one of my best years yet both personally and professionally, and I thank St. Mark’s for providing me with this opportunity. As I write these final lines for the LEO, I also look forward to many more adventures and am absolutely convinced that I can be a rock star and that the best is just over the horizon.

Charlie Sellers teaches Spanish and is the Head of the Modern Languages Department. He received his B.A. in Spanish and in English from Duquesne University and his M.A. in Spanish from Middlebury College in Madrid. He started teaching in Quito, Ecuador where he lived for two years after college. Mr. Sellers coaches soccer and squash, leads a service trip to the Dominican Republic with St. Markers every spring, and works in Marr/Coolidge House.

By smleo in Season 3, Vol 3.3 on October 27, 2015.
← The Dalai Lama: A Spiritual Leader Above a Political One Festina Lente: Reflections on Teaching and Gardening →