Home » Vol 3.2 » The Dalai Lama: A Spiritual Leader Above a Political One

China and Tibet have a long history of relations. Beginning with the Manchu rule of Tibet, conflicts and disputes between the Chinese and Tibetans have persisted. Unwilling to compromise with a centralized ruler, Tibet seized the opportunity to claim itself as an independent state after the overthrow of the Qing Dynasty. However, following the establishment of the People’s Republic of China in 1949, Tibet became an integral part of China. From then on, numerous riots and uprisings for Tibetan independence and the preservation of Tibetan traditional culture and religion have taken place (Goldstein 84-86).

One aspect of the complex relationship between China and Tibet has some connection with the Dalai Lama selection process. As a tradition of Tibetan Buddhism, Finding the reincarnation of the Dalai 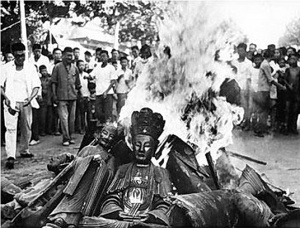 The Dalai Lama is the most highly esteemed Bodhisattva in Tibetan Buddhism, a Buddhist doctrine and institution that belongs to the Mahayana school of Buddhism, which believes in the return of enlightened beings — or bodhisattvas — into the cycle of life in order to assist the ones on earth to achieve liberation (Tibetan). As the Bodhisattva of compassion, the Dalai Lama is not only a spiritual leader but was also a political leader of Tibet. The High Lamas found Tenzin Gyatso, the current Dalai Lama, in their search for the next Dalai Lama. His extraordinary ability to identify the possessions of the deceased Dalai Lama ensured his destiny as a leader of Tibetan Buddhism and its people. He was later sent to a local monastery and was trained under the High Lamas. Taking up the position as a leader of Tibet, Dalai Lama XIV experienced a great challenge when the Chinese government invaded Tibet and claimed it to be part of the territory of the People’s Republic of China. Rumors spread that the Chinese government would kidnap the Dalai Lama, resulting in an uprising in Lhasa and a public efforts to protect the Dalai Lama (Dalai Lama XIV, Encyclopædia Britannica). The Dalai Lama fled to India where he received welcome from the Indian Prime Minister and tried to construct a region of Tibetan Buddhism and culture. His followers, refugees from the invasion, took part in an effort to create a Tibetan society outside of Tibet. The pressure of Tibetans’ uprising for independence and the failure to gain autonomy from China left the Dalai Lama no option but to escape to India where he could promote Tibetan religion and culture more safely (Dalai Lama, BBC). The Cultural Revolution helped the Dalai Lama gain international notoriety. The Dalai Lama spread his influence around the globe and gained support for his aim on the sustainability of the richness of Tibetan culture. (Dalai Lama, BBC). However, with the further enclosure brought by the Cultural Revolution, China became an even more totalitarian society where no practice of religion was allowed (Goldstein 84-86).

After the rule of Mao, a leading figure of the Cultural Revolution, the Chinese government reached out for negotiations with Tibet. They wanted to bring back the Dalai Lama. Unfortunately, their willingness to compromise and negotiate received a Tibetan response of increased nationalism and cries for independence. On the other hand, the economic and cultural prosperity of the Tibetan Autonomous Region was a step towards peaceful co-existence. Nevertheless, after several unsuccessful conversations between the Dalai Lama and the Chinese leaders, the Dalai Lama turned to the west for the first time for political support. The resulting uprisings and riots led to even more concerns and oppression from the Chinese government. Moreover, the opening of Tibet to the rest of China increased the number of non-Tibetans in the region, causing Tibetans to respond with campaigns to preserve their culture. On a global scale, the emerging US intervention in the Tibetan demonstrations for independence escalated the tension between the two sides, encouraging the Dalai Lama to provide a perspective on the issue (Goldstein 85-91).

Given the conditions between China and Tibet, the Dalai Lama faced two choices: conciliate and lessen the extent of autonomy in Tibet or continue and support the Tibetan nationalism spirit. The first option would definitely receive fervent oppositions from the exiled population and undermine his western support. On the other hand, the second option could lead to tumults that would betray the non-violence principle of the Dalai Lama (Goldstein 91-92). The Dalai Lama believed in the beauty of non-violence and rejected any possible solution that would require violence and force. Transitioning from an “earlier Dalai Lama” to a “later Dalai Lama,” Dalai Lama XIV desire for an independent Tibet changed. No longer pushing through the full liberation of Tibet, he chose to find the Middle Way. Recognizing the harms of extremes, the Dalai Lama looked for the autonomy that gave power for defense and foreign policy to the Chinese government while retaining the rights to culture, economy, and administration for Tibetans. Regardless, exiled Tibetans and the Chinese government both doubted his inclination towards negotiations and settlements. Not only was the Tibetan Youth Congress (TYC), a group of pro-independence radicals, unsatisfied with such a tenuous claim, the Chinese government was also skeptical of the Dalai Lama’s sincerity in his step towards compromise (Puri 3500-3502).

Despite the exiled Tibetans’ dissatisfaction , the Dalai Lama has publicized his decision to exclude himself from the politics were he to return to Tibet. He conformed to the idea that Tibet could be recognized as part of the territory of China and retracted his commitment to the separation of China and Tibet. One reason for his changing perspective might be found in China’s skyrocketing economy and manufacturing. Refuting predictions of a Soviet Union-like dissolution, China has risen up to a major power in the global economy and politics. The United States, for example, shifted from pressuring the Chinese government to participate in negotiating conversations with the Dalai Lama to supporting the maintenance of the territorial boundaries of China. Moreover, neither India nor Britain, two other allies of Tibetan independence, expressed opposition towards Tibet’s inclusion as a part of the People’s Republic of China (He 604-607).

Despite negotiation efforts, no significant progress has taken place in terms of the relations between China and Tibet. This lack of progress can, in part, be attributed to conflicts between the exiled Tibetans and those currently residing in the Tibetan Autonomous Region. Accusing the exiles of contributing nothing to the prosperity of Tibet, the Tibetan cadres are unwilling to give up power if the exiles choose to return. Furthermore, the Chinese government expected that the Dalai Lama address Tibet as an “inalienable” possession of China. His failure to directly say so became another barrier towards a more progressive settlement (He 615-618).

Nevertheless, the Dalai Lama’s concessions in the political and diplomatic affairs did not weaken his desire for autonomy in Tibetan culture and Buddhism. He has a clear determination in preserving Buddhism and a priority of Buddhism over other religions. Although the Dalai Lama supported ecumenism and the tolerance for all other religions, he insisted that in order to achieve enlightenment and liberation, one had to fully comprehend the Buddhist notion of anatta, emptiness, or “no-self”. While not trying to diminish other religions, the Dalai Lama disagreed that any religious teaching would be an effective raft. A raft carries one towards the other side of the river and the departure from suffering, dukkha, and the cycle of life. The Dalai Lama’s emphasis on compassion and love does not parallel the teachings of any other religion (Compson 271-279). “This is my simple religion.” He said, “There is no need for temples; no need for complicated philosophy. Our own brain, our own heart is our temple; the philosophy is kindness” (Brainyquote). His advocacy for Buddhist teachings has strengthened the public aspiration to protect and promote Tibetan Buddhism culture (Compson 271-279).

The Dalai Lama will be remembered as a spiritual leader assisting the devotees, rather than a politician. His position and changing perspective in Tibet’s struggle for independence may only be influential in the short term; however, his teachings and philosophy will be passed on to generations and generations.

Lucy Cao is a V Former from Shanghai, China. She lives in Thayer as a prefect. She loves art, music, and philosophy and enjoys traveling with her family.