This summer, I attended an all-girls program called Ai-4-ALL, formerly known as SAILORS (Stanford Artificial Intelligence Laboratory’s Outreach Summer Program). Inspired by the camp’s model “AI will change the world. Who will change AI?” I believe that people, instead of perceiving artificial intelligence (AI) as threats, should use it as a tool for impact. During this camp, I, along with seven other AI-enthusiasts, created a model for mapping poverty using satellite images.

Data show that poverty, one of the most pressing issues in today’s world, could actually be solved with our current resources. The world produces enough food to feed 10 billion people [link for source], which is much more than the current population. Since we have the resources, our question was: why can’t we find a solution to worldwide poverty? One of the reasons lies in the fact that we lack the proper data to determine how to best distribute these resources. Since conventional government poverty surveys are expensive, time-consuming, and sometimes dangerous, many underdeveloped countries cannot afford to conduct them. Thus, finding another way of targeting critical areas for support is necessary.

This is an image showing the differences in light intensities in nighttime satellite images in North Korea and South Korea. 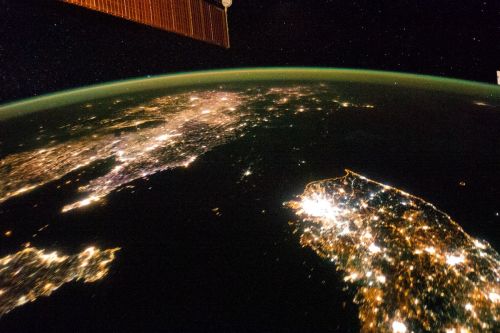 In our project, we explored how satellite imaging can be used to solve this problem. Satellite images are up to date and easy to obtain, so how can we make sense of and utilize them? The answer is deep learning. We used convolutional neural networks (CNNs) to process the images and automatically extract important features that are good indicators of poverty. CNNs are large networks that contain several layers and parameters, allowing us to learn a nonlinear mapping from visual input to class predictions.

However, training our model would require a large number of images labeled with their poverty conditions. Due to the lack of labeled data, we implemented transfer learning by pre-training the neural network to predict nighttime light intensities from daytime images, which is particularly useful because light intensity labels are readily available. We trained our model on a dataset containing 330,000 satellite images from Google Static Maps, allowing the model to learn general features from the images. For instance, images with more pixels of gray would be more likely to be classified as “no poverty” because large areas of infrastructures are mostly associated with wealthier regions. After creating an accurate working model for capturing these features, we transferred this knowledge towards predicting poverty with confidence in its accuracy.

The features extracted from the CNN were inputted into a logistic regression, which is a statistical method for binary classification. This yielded probabilities between 0 and 1 for the data points in order for us to determine whether or not a region is considered impoverished. Lastly, we used cross-validation in order to determine the set of hyperparameters that produces the best results. Splitting our dataset into a training set of 461 images and a validation set of 51, we were able to tune the parameters effectively.

When tested to predict poverty conditions in Uganda, our model was proven to be successful with an accuracy of 78%. Since this model can be trained on any set of satellite images, it could be utilized to find areas of poverty in countries other than Uganda. In the future, for instance, satellite images could also be used to target areas of droughts and predict farm productivity, which might be useful for other types of humanitarian aids. Using artificial intelligence and the data that we currently possess, we will be able to solve problems in an unprecedented way.

Cathy Zhou is a IV form boarding student from Beijing, China. She likes to play badminton and squash, and she enjoys solving math puzzles.

By smleo in 2018-19 v.1, 6th Season on September 25, 2018.
← Fitzgerald Deviates from Manichaean Plots with Gatsby Boys to Businessmen: A Blog About Industrial Real Estate →