Language Immersion Trips: A Must-Have For A Student’s Bucket List

Language Immersion Trips: A Must-Have For A Student’s Bucket List

I have loved the French language ever since I was in sixth grade. My middle school French teacher, Mrs. Okacha, made French my favorite subject because her class was both engaging and interactive. When I was in eighth grade, I helped lead one of her younger classes because I appreciated and enjoyed French so much.

After arriving at St. Mark’s and hearing about the French language trip offered every other year, I wanted to pursue it. I still loved the language, and I was to speaking a lot more French with my teacher, Ms. McColloch. I kept telling myself, “I can’t wait to be a sophomore and communicate in a real-world scenario.” I was exhilarated to find out that I got a spot on the trip. My French education would be applied in a real-world setting! Reading and speaking French was going to be challenging, but I was ready to take it on.

Sometime in the early evening on Saturday, March 10th over spring break, we arrived at Logan Airport. Everyone was anxiously waiting to land in Paris, but the flight to France was a seven-hour red-eye. After taking a poll in the customs line once we had landed, we discovered only one or two members of the group had slept for more than two hours on the plane. We were all extremely jet lagged, tired, and hungry. A forty-five-minute bus ride later, we had finally arrived in Paris! It was late morning at this point, and we were on our way to meet our host families at a neutral location not far from the bus stop. Once we connected with them, we went to drop off our luggage at their apartments  before taking on the first day’s activity: the Eiffel Tower. To travel around the city, we used the métro, which was something I had never done before.

After waiting for about an hour to get inside the Eiffel Tower, I finally saw how magnificent and beautiful the landmark was up close. The whole city of Paris became visible once our group walked up the second set of stairs. The Seine was the most visible site from the Eiffel Tower. Its glistening water was evident from the top of the tower.

After leaving the Eiffel Tower, we explored the Luxembourg Gardens and the Panthéon before our dinner at Polidor, where the 2011 movie “Midnight in Paris” was filmed. After a delicious first dinner in Paris, we were off to our homestay families to get some well-deserved rest. The next day, we had to get up very early in order to take our placement tests for the Accord School.

After taking our placement tests, both oral and written, we enrolled in classes at the Accord School. I was not surprised that the teacher only spoke in French. Almost all of my classmates spoke English, too. Many students in my class used French as a third language. Aside from the three of us from St. Mark’s, no other Americans were in the class, but we all used French and English to communicate.

With school starting at nine every morning, we got a break around eleven for twenty minutes before class ended at one o’clock. After our first day of classes, we went to the Louvre! Other than the Mona Lisa, I was looking forward to seeing the Greek Mythology section of the museum, including the Venus de Milo sculpture. Ever since reading Percy Jackson & The Olympians as a child, I persisted to learn more about this enthralling topic.

Concluding the three hours in the Louvre and eating dinner, we spent the night looking over Paris from the Arc de Triomphe. I could see the lit-up Eiffel Tower and the rest of the city from there. This day was my favorite, and I will always cherish these experiences.  The rest of the days had a similar structure; waking up early, attending class from 9-1, and sightseeing in the afternoons.

Another incredible experience was visiting the Palace of Versailles. I was so excited to see this after learning about it in Eurocentrism class at St. Mark’s. The architecture was intricate and beautiful.

Just when I thought that The Palace of Versailles couldn’t get any better, it did. After walking outside, I could see gardens for at least a mile. Right beside the gardens, a massive water fountain with golden decorations stretched forty or fifty feet across. 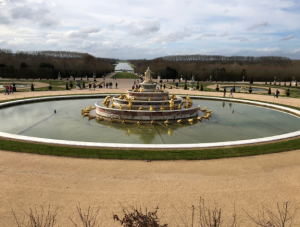 This trip is and will be one of my favorite St. Mark’s experiences. I truly feel one of St. Mark’s mottos, “Intentionally Small, Thinking Big” is a perfect description of this trip. St. Mark’s is a purposefully small school. We have small classrooms, but when we are given big opportunities like this, it allows us to apply what we’re learning in those small classrooms to the broader world.

Paige LaMalva is a IV Form day student from Southborough, MA. She likes playing sports and spending time with her family and friends.

By smleo in 5th Season, Volume 5.12 on April 24, 2018.
← The Fight for Women’s Rights in Haiti Leadership from All Directions – The Collaborative Effort of Lion Term →