Alternate title: “When a Freshman Stops By Your Office and Two Weeks Later You’re a Site Host and Proctoring a Three Hour Linguistics Competition for Seven Students!”

While toiling over thesis statements and parallel structure in the writing of my IV Form students, I heard a knock on my office door and saw a smiling student. III Former Clara Hua introduced herself to me and asked if I knew anything about the NACLO linguistics competition. I said no, and then Clara explained it all to me. She wondered if I, through my Enrichment position, could potentially make St. Mark’s a site host so that she could compete. Since I am fascinated by cool ideas and I love when students want to compete in academic challenges, I told Clara that I would look into it. Soon, I sojourned down a rabbit hole of links and queries through the world of linguistics. Through NACLO (the North American Computational Linguistics Olympiad via http://nacloweb.org/), I learned how to establish St. Mark’s as a NACLO high school site and myself as a site coordinator. I emailed Clara to tell her, and while she set off to advertise the competition among students, I realized that I needed to know what the heck, in fact, a computational linguistics competition actually is!

As defined in NACLO’s “Coordinator Handbook,” the Linguistic Olympiad “is a fun (and educational!) contest for U.S. and Canadian high school students in which contestants compete by solving compelling and creative puzzles in linguistics and computational linguistics. Requiring no previous knowledge of linguistics, languages, or computing, these puzzles can be solved by analytic reasoning alone, and serve as a fun introduction to a field to which many high school students have never been introduced.” The puzzles can follow under these types: translation problems, number problems, writing systems, calendar systems, formal problems, phonological problems, computational problems. The Handbook also proclaims that these types of puzzles are also possible: “Deciphering kinship systems, transcribing spoken dialogue, associating sentences with images, translating unknown languages from scratch.” Whoa!!

I delved into some of the practice problems on the NACLO site to discover that the puzzles are maddening, mind-melting, and thrilling. After several hours on just one problem, I became even more impressed with Clara’s initiative and desire to compete!

According to naclo.web, “1,700+ students have been participating yearly at 100+ high school sites and about 50 university sites.” Clara promoted the competition and succeeded in enticing six other students to also partake in the challenge. I took on the logistics of getting the students registered, connecting with all of their teachers about them missing at least one class period because the competition is three hours long, and studying the Coordinator Handbook (since the competition is national, strict protocols are in place for all aspects of conducting the competition at the site and staying in contact with the NACLO representatives throughout the competition).

To see what the competition might look like in action, I directed my students to one of the online practice problems and had my IV Form class tackle it. Brain wracking ensued! 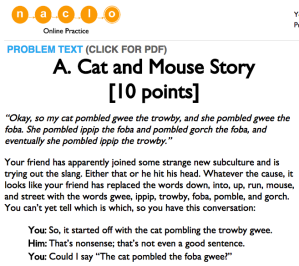 Click image for the full problem! I dare you… 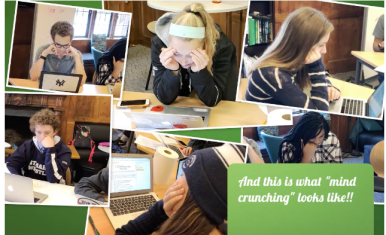 My class struggling with the puzzle! 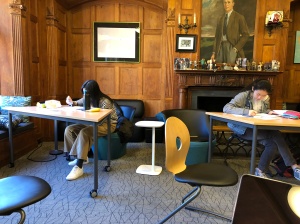 On January 25 in my classroom, I administered the 12th annual competition for the seven students (three freshman, one sophomore, one junior, two seniors). The booklet contained eight problems to be attacked over the three-hour window. While the students could write in the booklet and use the pages in it for scrap, all answers had to be clearly rendered on the specified answer sheet. At the culmination of the competition, I had to scan all answer sheets into PDFs and send them to the NACLO judges. Per the Handbook, “Every problem will be worth a specified number of points; harder problems are generally worth more points. The judges will score each solution based on its correctness, quality, and clarity, and determine the overall score as the sum of solution scores. The judges will complete the scoring and announce the results (ideally, within three to six weeks after the competition).” The students are not allowed to discuss the problems until results are revealed. 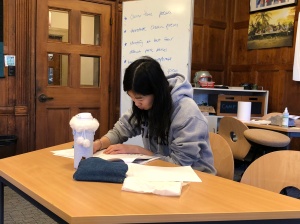 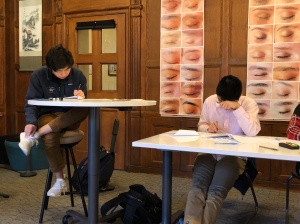 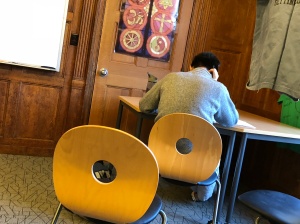 This was the “open round.” The judges will identify strong contestants to advance to the “Invitational Round” in March. From there, national winners are declared and are eligible to participate in the international competition, “The International Linguistics Olympiad (IOL).”

This has been a fascinating learning experience—with great thanks to Clara for being the catalyst! I aim to maintain St. Mark’s as a site host and support any students interested in pursuing the linguistic competition endeavor.

Furthermore, I asked the seven students two questions after the event. Below are my questions and four student responses:

Why did you want to partake in this linguistics competition?

Have you had any training in your past for this type of competition or with the study of linguistics in any way?

Samantha Wang, III Form: 1) I enjoy solving linguistic puzzles; it’s actually an exciting time to gain the feeling of the beauty and mystery of languages. The puzzles made me concentrate to observe the words and their patterns carefully— they are not only simple symbols any more; the words also have so much fun if we’d like to take time and appreciate them.

2) I’ve never had any training on linguistic competition before, but I am willing to try more of this type of competitions in the future.

Tianyu Zhao, VI Form: 1. I wanted to participate in this linguistics competition simply because it sounded fun. I looked at a few problems from past years’ exams, and I was surprised by the variety of the languages involved and the intriguing ways questions are asked, such as deducing meanings of words and symbols, learning to write in their grammars, or figuring out the calculation rules in a different numerical system. It’s a brand-new intellectual challenge that I never came across before.

2. I never had any training for linguistics competition or the study of linguistics in general. However, recently I got interested in the idea of computational linguistics and read a paper on how mathematical probability is applied to basic linguistics study. I’m also planning to learn more about artificial intelligence, where linguistics plays an important role in representing human language in machines and computers.

Clara Hua, III Form: 1. I’m a great fan of linguistics, so I thought, this was really a great opportunity to have the chance to solve some interesting linguistics puzzles and use my logical reasoning! I looked at some of the problems in the past years and they were definitely fun to dig deep into. There were translation problems, number problems, writing systems, etc. I also got the chance to be introduced to some languages I’ve never heard of before, such as Māori and Tshiluba. I would recommend everyone who’s interested in either languages or simply solving puzzles to participate; it’s much more fun than you think it would be! The three hours definitely passed in an instant.

2. I’ve studied multiple languages, but I’ve never been trained to linguistics itself. However, I think this competition really gives me some new insights into learning more about the differences between languages, and other topics that are related. I’d love to solve more language puzzles!

Cathy Zhou, III Form: I haven’t had any training in linguistics before. However, I was interested in how different languages vary so much in pronunciation and writing, while they are so similar in grammar and structure. After skimming through the past problems, I found it interesting sitting in front of my laptop, trying to figure out what “Kamilata vǎrvya” meant in Bulgarian with the clues that I was provided. It is the logic and reasoning behind these problems that fascinated me and drove me to partake in this competition. Without any knowledge about the language given in the problem, I struggled to compare the sentences and phrases, trying to find a key point of connection, and making wild guesses. It brings me a great sense of accomplishment when all the sentences suddenly came together and made perfect sense after a point of connection was found. 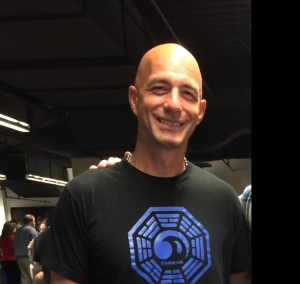 John Camp (@gettinglostcamp) teaches English and is the Director of Student Enrichment in The Center for Innovation in Teaching and Learning. He holds a B.A. in English from Middlebury College and an M.A.L.S. from Dartmouth College. He lives on campus with his wife Tara and their three children, Grady (10), Joss (9), and Desmond (5), their two Westies (Simon & Mick), and their two greyhounds (Jody & Hurley).