Ever since kindergarten, I have been beekeeping with my mother, but we aren’t the first in our family. Our beekeeping tradition goes back four generations to my great-grandmother Charlotte Ames, but I am the first male beekeeper in my family. My sister, on the other hand, does not want to involve herself with bugs in any way. She will go days without using her bathroom if there is a ladybug somewhere inside.

I  have loved bugs all my life. When I was three or four years old, I would find stinkbugs, because my old house had an abundance of them, and stuff them in my matchbox cars and drive them around town. Though I couldn’t get my hands on bees to put them in cars, I still loved them anyway.

Most people’s #1 worry about bees is that they will sting you. Well, here are some facts that might make you feel more at ease the next time one flies around your head and your friends start flipping out:

Every time I’ve gone into the hive, even as a young kid, I haven’t gotten stung. I’ve gone in without any protection on and had bees crawling all over my body and hands and even then haven’t been stung.

There is a process to beekeeping. You can’t just get the honey, but once the hives are all set up, collecting honey gets easier every year. You have to build or buy the hives, which are made of wood with stacked levels filled with wax tablets. Early in the spring, you must give the bees sugar water until flowers start to bloom with pollen. Then, the bees “Age Quod Agis” and pollinate flowers, vegetables, and fruits. From there, you must check on the hives twice a week to make sure that everything is moving properly. Things to check for would be too many bees, which means you need to expand on the hives. Or, another time thing to check for would be if they barely laid any eggs. Other things to check for are threats to the hive: intruders like mice, mold, and even in one case, a six-foot mama bear that once came to our backyard for four nights in a row and wreaked havoc on the hives and took the honey. My dad had to pee around the perimeter of the hives because the smell of humans scares bears away. Finally, you harvest the honey by scraping it off the wax tablets. Don’t feel bad about taking the honey – bees produce three times more than they need to survive, so leave some of them, but don’t be afraid to take some as well. Since my family has three hives, we produce a few large buckets of honey to give to our friends and people we appreciate each year.

Even though bees are happy little creatures, unfortunately, much of the world’s bee population is dying. Beekeepers are opening up their hives to the sight of dead bees or empty hives. This is called Colony Collapse Disorder. In some places, bee populations have dropped 90%. This is not good for the crops of the world or for our little friends. Theories are saying that the cause could be many things, but the two most probable are phones and pesticides. People should be aware of this, because there is a huge possibility that soon bees will die off, and that means a large percentage of our food supply would be put at risk. This is one of the reasons I keep bees and one of the reasons why local farms and neighbors don’t use pesticides.

For me, some of the best parts of beekeeping are that a bee colony is extremely fascinating, considering

that each bee has its own separate role and all bees depend on and support each other. They feed each other, take care of each other’s kids, and huddle together for warmth. None can be successful without each other. A beehive is metaphorically and quite literally a family. I am also happy because I have taught many people about beekeeping, and because of that, one of my best friends has begun taking care of his own beehives. Beekeeping is also a special thing for my mom and me; we love to do it together.

Here are some more fun facts that are legitimately fun:

FINALLY… Honey Bees like Starbucks and Dunkin’ Donuts as much as we do. Caffeine is a natural substance found in some pollens and wouldn’t you know it, bees go back to plants with those pollens most often!

In the future, I hope to start beekeeping and raising bee hives at St. Mark’s! 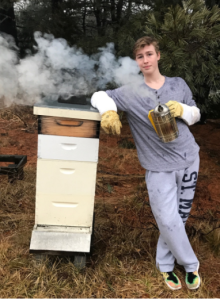 By smleo in 5th Season, Volume 5.9 on February 20, 2018.
← Project Based Learning in The Global Seminar: The Zamibia Presentation Hosting the NACLO National Linguistics Competition →