“Bad translations communicate too much” (1). In After Babel, George Steiner points out that a bad translation strips the original text of something important by unnecessarily applying new elements to the original text. In English translations of Chinese poems, one type of bad translation attempts at over-explaining the metaphors, or metaphorical objects, in the poem, which puts readers at the risk of accessing less information that the metaphor otherwise would have presented to the reader- – that is, a fuller image that the poem originally presents.

Let’s compare the following two translations of the same poem: Nian Nu Jiao: Chi Bi Huai Gu by Chinese poet Su Shi (2). *Literally translated into “Nian Nu Jiao: At Chi Bi Cherishing the Past”, with which Nian Nu Jiao is the tune that the poem rhymes. 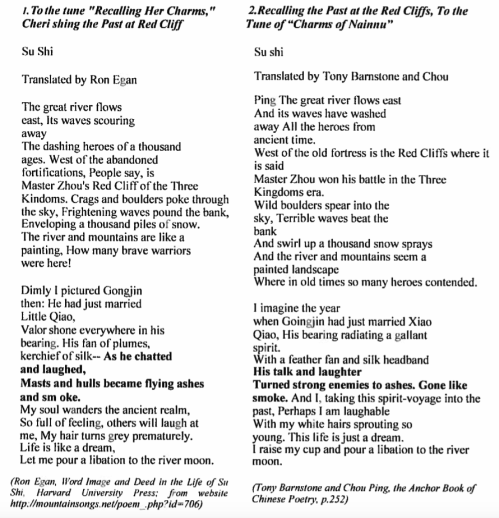 Su Shi wrote this poem when he was visiting the Red Cliff near Huangzhou (3), where a very important historical battle took place during the Three Kingdoms era (AD 184/220–280). In this battle, Zhou Gongjin from the Wu kingdom defeated his enemy Cao Cao from the Wei kingdom. This battle is understood to be a miraculous triumph for Zhou, for two reasons. First, Zhou led an army of no more than fifty thousand soldiers, while Cao had more than one hundred thousand soldiers; second, Zhou was much younger and had less battle experience as a general than Cao (4). With his consummate military leadership demonstrated in the battle, Zhou is usually celebrated as a courageous hero over the course of Chinese history.

In the line “谈笑间、樯橹灰飞烟灭,” which directly translates to “during talks and laughter, masts and hulls became flying ashes and vanishing smoke”, Su depicts a superb general who was able to win the battle with utmost ease. To highlight Zhou’s heroism, Su illustrates his enemies with the image of the “masts and hulls.” The concrete image of masts and hulls prompts readers to imagine the other parts of the ship and, consequently, the whole armada, for where there are masts and hulls, there must be ships, thus completing in their minds an image of Cao’s formidable army. Such a strong army then becomes ashes and smoke under Zhou’s strategic command, while Zhou is still bantering with his friends. This exaggeration of Zhou’s ease poses a strong contrast to his great victory in the battle, reminding readers of Zhou’s militaristic talents as well as his admirable qualities such as his calmness and strategic-mindedness.

Regarding this line, Tony Barnstone and Chou Ping, in The Anchor Book of Chinese Poetry, present the following translation—

His talk and laughter

This translation replaces the image of “masts and hulls” with a direct indication of what it represents —“strong enemies.” While it seems that the translators have taken an additional step, leaping from the metaphorical objects to the explicit information per se, what really happens here is a reduction of the poem’s effect on the readers. Without imagining the image, a process necessitated by the metaphorical “masts and hulls”, readers cannot access a vivid image with details — a massive armada of ships and tens of thousands of soldiers. As a result, this translation strips readers of the opportunity to relive the story enriched with details; readers are more likely to obtain, merely, the knowledge that Zhou is a superb general who managed to beat powerful enemies, without experiencing the level of immediacy of the details that such a metaphor brings about. In this way, even though this translation directly reveals what “masts and hulls” really mean, it puts readers at the risk of not engaging with the battle scene itself, reducing what otherwise could have be a powerful imagination to the mere information of “strong enemies.”

Contrary to the approach of Branstone and Chou, Ron Egan produces a different translation—

As he chatted and laughed,

This translation would likely invoke, in readers’ minds, the picture of the battle scene. It invites readers to envision the powerful army, feel in their hearts the greatness of Zhou to have crushed down such an army, and nod alongside with Su at the young general’s heroism. By directly translating “masts and halls” into English without further explanation, Egan retains the seemingly indirect objects that Su Shi depicts in this poem, which nevertheless are more likely to evoke the visualized details of the ships and the battle than the more conceptually translated “strong enemies”.

Metaphors are significant in poetry, because they offer more information than mere narrative or description of certain concepts, inviting readers to engage in their own imagination evoked by the metaphorical objects. A metaphor typically contains more perceptual information or referencing to certain archetypical stories that convey a more lively message than its conceptual counterpart. For example, the metaphor “Achilles’ Heel” contains wider context than the phrase “fatal weakness”. What lies behind “Achilles Heel” is a widely known story, in which an invincible figure has but one weakness: his heel. This metaphor, originating from Homer’s intricate yet convincing plot, has left deep impressions in generations of readers that once invoked, carries more depth than mere “fatal weakness” per se. The story behind the metaphor not only presents to people a more lively message; it also reminds people of the graveness of such weakness. Thus, while “Achilles heel” and “fatal weakness” both convey the same piece of information, the former metaphorical approach brings out the significance of such information by referencing to a widely-known household story, whereas the latter largely remains an abstract idea that is disconnected from a concrete context.

Bad translation does not preserve the metaphor but instead directly reveals the message, thus stripping readers of the chance of encountering metaphorical objects like “masts and hulls.” While Barnstone and Chou’s translation makes the additional efforts to present the straightforward message to the readers, instead of preserving the metaphorical object, it reduces readers’ imagination of more concrete details to more abstract concepts. On the other hand, metaphorical objects highlight the crucial qualities of the message. They enrich it with contexts, evoking in the readers a train of associated thoughts, and lead the readers to a much more enriched poetic experience that extends far beyond the conceptual understanding that they may or may not relate to. Without the metaphor, the message fails to be as vivid, engaging and evocative.

The metaphor is an essential part of this particular poetry, and to take it away is likely to carve out an important part of readers’ experience with Chinese poetry. Therefore, the translation that Barnstone and Chou present communicates too much in that it takes an unnecessary leap forward and spells out the information for its readers, while Egan’s translation retain the metaphorical objects, thus enabling its readers to free their imagination, and soar along with the endless possibilities and details that “masts and hulls” continue to convey.

Helynna Lin is a VI Form boarding student from Guangzhou, China. She is a prefect in Theriot North and enjoys piano and tennis.