The Picnic: An Original Short Story

The Picnic: An Original Short Story

Editor’s Note: In the elective Rise of the Short Story, Ms. McCann presented these parameters for this assignment–“Write an atypical scary story.  It should be existentially scary, not something about ghosts or vampires. Whatever scares you is fair game for this story, a scary story with truth and heart. Since your subject matter is atypical, the way you tell this story should be, too. How can you push beyond the typical plot line that goes: exposition, building tension, climax, falling tension, resolution?”

Rey was born coated in honey. Bees flew out of his mother’s open womb, and saw themselves out the window. The doctor shuddered but did not scream. His wrinkled fingers simply scraped the nectar from the soft folds in the baby’s skin.

Carmen, drowsy on the chloroform, was too exhausted to mind the bevy of bees. During her pregnancy, she’d had the most desperate of cravings for honey. How many times had she jammed the overflowing spoon into her mouth when no one was looking? Or sucked on honeycombs during afternoon tea? She dismissed her folly and kissed the honey dripping from her son’s eyelids.

“A totem child,” was all the doctor said, his eyes welled with worry.

It is Rey’s eighth spring. He and Carmen are on a picnic in the Botanical Gardens. The bright blue sky is brilliant against the multicolored flowers. There is no one around but he and his mother. It’s the perfectday, Rey smirks. He takes off into the open field. Carmen watches him run around barefoot. When he’s had enough, he falls next to his mother onto the picnic rug. Grass blades press into Rey’s back. He watches the clouds drift overhead. His chest rises and falls quickly. His heartbeat drums in his ears.

Carmen tucks cheese and lettuce into their sandwiches. A soft humming fills the boy’s ears. He furrows his brow and places a hand over his heart. It’s no longer beating as quickly as before. He sits up, and looks around curiously, Where are you?His eyes settle on some faraway flowering shrubs. Every fiber of the boy’s being throbs at the sight of them. They sway in the wind tauntingly. The humming intensifies. A burning urge pulses through his arteries. Rey glances at his mother, who is naively making lunch. She does not seem bothered. The boy shifts his focus onto the picnic rug’s checker pattern. It morphs into white and red flowers.

The humming is deafening. Rey’s body aches. He needs to stick his tingling fingertips into the open petals and feel their velvet texture;  he must taste and inhale them.

Yes, yes, a voice other than his own cries, Stand naked in the sun! Let the pollen of wildflowers settle on your bare skin!

Despite himself, Rey rips his clothes off. He abandons them by the basket and flies towards the shrubs. The startled woman takes off after him, clutching the picnic rug to throw over her nude child. A violent buzzing rattles Rey’s ribcage. The syrupy ecstasy of sticking his throbbing fingertips inside flowers, of pollen coating him from head to toe, clouds his judgment. The blazing sun makes him break into a sweet sweat, and bees land lightly on his exposed skin. He cringes at the sight of the insects, but something within him forces him still. Listen to me, the voice says. Reluctantly, he gives in.

At first, they approach one by one– a gentle hum, a fluttering– then, they come in swarms and hover like crows in circular flight. Their spindly tongues nibble at him eagerly. He shivers in absolute delight. He giggles as they crawl around the arc of his earlobes, the backs of his knees, and along his jawline. Soon, they cover every inch of him. Carmen does not move. A scream clogs her throat.

The insects crawl inside Rey’s golden eyes and up his nostrils, over his dark lips and into his dissolute mouth. They find every opening to get behind his supple skin and into his ribcage. He waits for the moment where they will sting. But they do not. It makes him hungry.

Carmen starts to swat the bees away, overcome with the desperate desire to save her son. Their buzzing intensifies, but only slightly. Her strikes grow forceful, crippling a few, killing others. Rey howls. His blood boils. Go,he breathes.

Brisk, recurring bites burn Carmen. The woman screeches. Several bees dive down her open throat. She flails her arms and tries with no avail to run. Her pulse weakens. She slowly loses consciousness. The boy cackles. Whimpering and bitter buzzing fills the air. On Rey’s command, the insects disperse. Carmen’s splotchy swollen sack of bones collapses onto the pile of lifeless servants.

The remaining bees resume eating away at the boy until they uncover his waxy frame. Rey falls back, sprawled on the grass. His eyelids seal shut. Honey oozes from his corpse. The bees head straight to his honeycomb heart. They wait patiently for the next command. Ever so slowly, their lost queen emerges.

Disdainfully, she glances at Rey, her empty vessel. 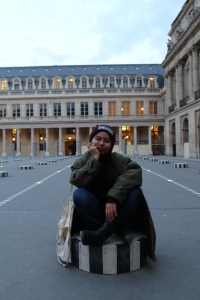 Daniela Martinez is a VI former from Chicago IL. She enjoys a good book, summertime, and daydreaming.

By smleo in 2018-19 Prize Day, 6th Season on June 6, 2019.
← The Effects of the Ketogenic Diet’s Effect in a Drosophila Melanogaster Model of Parkinson’s Disease A Fourth Amendment Opinion →