An Eastborough College student, petitioner Mike Smith, was driving his car near campus when Officer Frank Jones recognized Smith’s car as one that he had stopped a few weeks prior. After following Smith for three blocks, Officer Jones observed Smith swerve past the median line—a traffic violation. He promptly pulled Smith over. While the car’s passenger, John Brown, was discernibly intoxicated, Smith exhibited no signs of drunkenness. However, when asked to walk in a straight line, Smith failed, and he refused to take a Breathalyzer test. In response, Officer Jones returned to his squad car, procured a “sniffer” device, and, without Smith’s consent, tested Smith’s blood alcohol content (BAC) using the device. The device showed that Smith’s BAC exceeded 0.08%, the legal limit for driving.

Officer Jones then arrested Smith for drunk driving, handcuffed him, and searched him. He found a pack of rolling papers, which Officer Jones interpreted as drug paraphernalia for marijuana cigarettes. Thus, Jones secured Smith in a police cruiser and subsequently searched his car. Upon finding a small, locked container, Jones broke the lock and discovered heroin. The State of X has charged Smith with drunk driving and possession with intent to distribute heroin, but Smith has moved to suppress all evidence obtained during the traffic stop, arguing that the searches and seizures that occurred violated the Fourth and Fourteenth Amendments.

The case before us concerns a few Fourth Amendment conflicts: they regard the use of a “sniffer” to detect BAC without consent, whether or not the discovery of rolling papers in Smith’s pockets qualify as probable cause to conduct a warrantless search, and whether the automobile or exigent circumstances exceptions allowed Jones to search the locked container in Smith’s car.

Officer Jones’s pursuit of Smith for three blocks before pulling him over, whether or not it qualifies as a search, does not violate the Fourth and Fourteenth Amendments. While the police did follow Smith to obtain information, the pursuit that occurred did not violate Smith’s “reasonable expectation of privacy” because it occurred on public roads. Unlike in U.S. v. Jones, the police in this case did not “physically invade property to gather information,” as the information that Officer Jones obtained could have been gathered by anyone driving an automobile. Furthermore, whereas the police placed a GPS tracker on petitioner Jones’s car to follow him for four weeks, they used no technology to monitor Smith’s movements. Thus, the police did not violate Smith’s right to privacy.

The use of the “sniffer” after Smith refused a Breathalyzer was unconstitutional in this case. A search, as defined by U.S. v. Jones, occurred, because Officer Jones “physically invade[ed] property to gather information” about Smith’s blood alcohol content that he could not have gathered without the “sniffer.” In 2001, Kyllo v. United States ruled that the use of a thermal imager was unconstitutional because the police used “sense-enhancing technology” to examine heat emanating from certain parts of Kyllo’s home. Likewise, Officer Jones enhanced his ability to smell alcohol—and circumvented the consent requirement for administering a Breathalyzer—with the “sniffer.” The State in Kyllo argued that a heatmap was not an intimate detail of Kyllo’s home, and similarly, the State has argued that one’s breath is not an intimate detail either. The Supreme Court rejected such a “mechanical interpretation of the Fourth Amendment” in Kyllo because it would “leave the homeowner at the mercy of advancing technology.” Moreover, the Court in Kyllo sought to “assure preservation of that degree of privacy against Government that existed when the Fourth Amendment was adopted.” Permitting the “sniffer” device, therefore, would defy the precedent set in Kylloby subjecting drivers to a technological advancement that has enhanced the senses of police officers. Moreover, it would erode the privacy that Americans enjoyed when the Fourth Amendment was ratified.

The decision in Birchfield v. North Dakota does not protect this specific use of the “sniffer” because that case only upholds compulsory breath tests if they occur incident to a lawful arrest. Because Jones did not arrest Smith until after confirming his BAC with the “sniffer,” its use remains unconstitutional.

Exceptions to the warrant rule exist because a civilized society must be willing to balance safety interests—which include preventing drunk driving—with a right to privacy. However, allowing the non-consensual use of a “sniffer” without a lawful arrest is not a reasonable privacy sacrifice to serve the interest of preventing drunk driving. This is because police, under the Fourth Amendment, must typically still obtain warrants to search the house of a person suspected of murder, racketeering, arson, or any other crime. Once the Court names one crime for which police officers do not need to obtain search warrants, it will become more likely to create such exceptions for other crimes. Eventually, it will erode the Fourth Amendment, which intended to protect suspected criminals from “unreasonable searches and seizures” regardless of the crime they committed.

Smith’s crossing of the median line and his inability to walk in a straight line may have qualified as probable cause to arrest him because these two events occurred during Spring Fling, a weekend that Eastborough College warned would have heavy drinking. Thus, the arrest could have been constitutional regardless of the use of the “sniffer.” Because Jones conducted a lawful custodial arrest, the body search that revealed rolling papers would have also been constitutional under the “search-incident-to-arrest” exception.

Officer Jones searched Smith’s car, including the locked container inside of it, after the constitutional body search. Under Arizona v. Gant, if Jones searched Smith’s car to find more evidence for drunk driving, it would have been constitutional. Gant allows warrantless car searches if an officer has reason to believe that the car may contain evidence of the offense of arrest.

However, the State cannot justify the car search under the officer safety clause of the “search-incident-to-lawful-arrest” exception. As established in Arizona v. Gant, this exception applies only to “the area from within which [an arrestee] might gain possession of a weapon or destructible evidence.” Like Gant, Smith was arrested for a routine traffic offense “for which police could not reasonably expect” to find weapons in his car. Moreover, Smith was secured in a police cruiser with another officer while Jones conducted the search, so he would not have been able to access a weapon during the search. The decision in Thornton v. U.S., which ruled a post-arrest car search constitutional, does not protect Officer Jones’s search of Smith’s car because it rested on the assumption that Thornton could have accessed his car during the search. Unlike Thornton, Smith was handcuffed and secured in another cop car with another officer, so the car search was not necessary to protect Officer Jones.

Furthermore, if Jones searched Smith’s car solely because he was seeking more evidence of marijuana use, it would have been unconstitutional. This situation somewhat parallels that of Wyoming v. Houghton, as in both cases, an officer conducted a full car search after discovering potential drug paraphernalia on a person he had stopped. However, the police had legitimate probable cause to conduct the search in Houghton because the driver admitted that he used the syringe to shoot up heroin. In this case, however, Officer Jones did not confirm that the rolling papers were drug paraphernalia, so the car search was unconstitutional. The discovery of rolling papers does not qualify as probable cause as defined by Ornelas v. U.S. because there were no “historical facts” that confirmed that Smith was a drug user. Instead, Jones’s justification for searching the car was rooted in his speculation that Smith used the rolling papers for illicit marijuana use, not for any of the other legal purposes for rolling paper, like for cleaning lenses or rolling legal cigars.

The decision in California v. Acevedo does not protect Jones’s search of the locked container that contained heroin because that case only upheld searches of movable containers in vehicles if there is probable cause to search the container. Whereas the police observed Acevedo leave his apartment with the brown bag that later was found to contain marijuana, Officer Jones had no previous knowledge of the heroin-containing box in Smith’s car. The ruling in U.S. v. Ross does not protect the search of the locked box either because in that case, the Court sanctioned full vehicle searches, including of all containers, only if there is probable cause to search the entire vehicle. Therefore, when conducting warrantless vehicle searches, police officers must be able to discern between containers in which there is probable cause to find evidence and those in which there is no probable cause to find evidence. Just because Smith was intoxicated while in an automobile does not mean that there is probable cause to find evidence of drinking in every part of the car. The State has been unable to prove that breaking the locked box in Smith’s trunk was included in the “object of the search” for alcohol. Permitting the search of the box simply because alcohol could have been in the container would erode all Fourth Amendment privacy rights for drivers.

The District Court must suppress the evidence that Jones gained from using the “sniffer.” However, it can retain any evidence gathered from the car search, excluding the search of the locked box in the trunk. 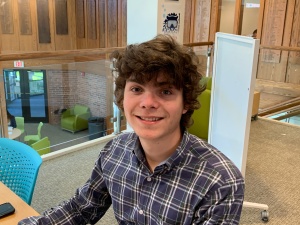 Matt Walsh is a VI Form Day Student from Southborough, Massachusetts. His academic interests include chemistry, history, and politics, and he enjoys playing baseball and performing with the trumpet in the jazz band.