Nepos: What Was No Spartan Woman Too Proud To Do?

Nepos: What Was No Spartan Woman Too Proud To Do?

When Ms. Cook and I were going over what I had read over the week sometime early in Window 1, we came across this phrase. I flagged it down as a potential essay topic and have looked forward to exploring it in more detail. I am looking forward to researching the morality of the Greeks and Romans, or how the Romans viewed the morality of the Greeks. Currently, I have almost no knowledge of the subject. All that I know I learned from reading Nepos. I think that it might be “ad scaenam” because in line 5 he also mentions the stage.

What could Nepos have written on line 4 of his Prologue? What was no Spartan woman too proud to do? Judging by contextual clues, which option makes the most sense? What evidence from the Latin text supports your claim?

In the prologue Cornelius Nepos’ book Lives of Eminent Commanders, Nepos attempted to explain the differences between the cultures of his Roman audience and the Greek subjects of his writing. He wrote about how some of the Greek practices would have been seen as nefas, or “unspeakable” and vice versa (Nepos. Pro. 4). There is one specific sentence in the fourth line that has caused much debate between scholars about what Nepos intended. The surviving test is: Nūlla Lacedaemonī vidua tam est nōbilis, quae nōn †ad cēnam† eat mercēde conducta,  meaning “no Spartan woman was too proud to go as entertainment for a feast for pay,” (Pro. 4). The daggers surrounding the ad cenam indicate that those words are corrupted, meaning that it is not entirely known if they are the author’s original words. There are three phrases that could fit into the sentence: ad cenam, ad scenam, and obscena ineat. Considering the surrounding text, ad cenam fits into the sentence the best. 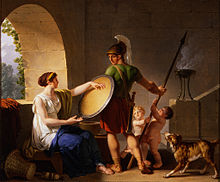 This leaves the two more feasible options: ad scenam and ad cenam. L and A use ad scenam, which translates the sentence as follows: “no Spartan woman was too proud to go on the stage for pay.” P and the correcting hand of A say ad cenam. In the passage, the next sentence, which is giving another example of Greek traits of honor that were seen as disgraceful in Roman culture, Nepos mentioned the stage. This makes it far less likely that ad scenam was used between the daggers. It is hard to believe that the author would use the same example twice in a row. There were plenty of differences between the cultures of the Greeks and Romans, and it would have been easy to find a different example for the next sentence if he had used ad scenam.

The only remaining option is ad cenam. Spartan women were given much more freedom in their society than in most other societies, including Rome. These freedoms granted to women in Sparta, such as being able to be work as entertainment at a feast for pay, may have been seen with disdain by the Romans, since, to them, women should be dependent on their husbands. In their culture, “Roman … women were, themselves, property to men”(Cox 2). The underlying belief of Roman men, who were the target audience for this text, was that women were less important and that they should be financially dependent on their husbands. Hearing that Spartan women had freedoms to earn money for themselves would have shocked them.

Three phrases are the most likely to fit between the daggers in the fourth line of Nepos’ prologue of the lives of eminent leaders: ad cenam, ad scenam, and obscena ineat. Due to contextual clues, ad cenam is most likely to be what Nepos wrote. Obscena ineat was not found in any of the manuscripts, and ad scenam was already used as an example in the next sentence, leaving only ad cenam. This question of word choice may sound trivial, but it illuminates the cultures of both the Romans and Greeks. Whether a Spartan woman took no shame in entertaining on the stage or at a feast makes a large difference. Those examples are great ways to learn specifics about the experiences of the ancient world. Every detail gives us a better understanding of what exactly life was like back then.

Tommy Flathers is a IV form day student from Southborough MA. He enjoys playing soccer and spending time with his family.