Artist’s Note: In Advanced Studio, I began working on theme of “environmental crimes.” All of the pieces below, however, were produced outside of class.

Environmental crime and excessive use of natural resources are excellent examples that show how grave this matter is. Gas, which is a key representative factor in this artwork, is one of the many nonrenewable natural resources. This means that once we use it all up, there is no more left for us. Although people do know that gas is a nonrenewable fuel, they still choose to continuously deplete it.

The artwork illustrates what might happen in the future if this practice continues. The consequences may be huge: eventually, human beings may even die. Like karma, humans use
an excessive amount of gas for electricity, heating, and other industrial uses, but when they are actually in desperate need of it, they might not be able to find any.

In 2012, the United States alone consumed nearly 26 trillion cubic feet of natural gas. The rate at which people consume gas exceeds the rate at which gas is being produced. In more extreme terms, with little resources left, countries might even compete for these natural resources, which will most likely lead to catastrophe.

Thus, reserving and maintaining the right amount of natural resources is a vital factor that everyone needs to take into consideration.

Poaching elephants is a critical matter. Elephants have been always poached for their ivory tusks, and they are poached alive to maintain the tusk’s best quality.

Then what are the tusks used for? One of the main uses of the ivory tusks is in making of a piano. Fortunately, plastics replaced some of the ivory nowadays, but piano keys used to be made of elephants’ ivory tusks. Ivory keyboards were a sign of wealth and luxury.

However, the number of elephants killed quickly amounted to a grave number, placing elephants under the “species near-extinction” list.

Extinction of elephant species is nowhere near the worth of having slightly better-quality pianos.

It is part of an exigent environmental crime activity that could disturb the sustainability of not only elephants, but many animal species.

Deer don’t just die from road kills – they also die indirectly from human pollution. But this artwork is not only about the deer; rather, the deer is only a representation on behalf of the whole animal species. The artwork shows how they are affected by city pollution.

Gas leakages, deforestation, and even simple works of pollution, such as throwing away an empty can in the middle of the street, can all affect the lives of animals. Their habitats will be destroyed, contaminated food will poison them, and many other detrimental factors will arise for the myriad number of living animals.

This artwork mainly represents an idea that even small acts of environmental crimes can cause consequences beyond human imagination.

“Falling Through the Cracks” 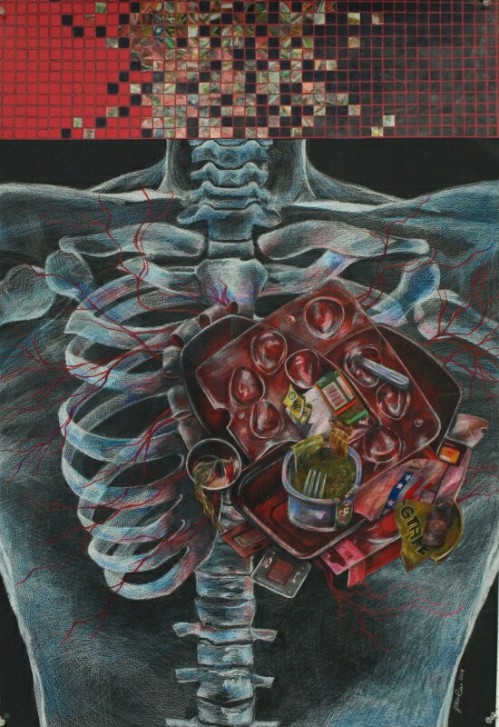 Empty plastic water bottles, cans, shampoo bottles, and other waste that humans throw away have been accumulating in the Pacific gyre, forming a massive garbage patch that has amounted to the size of Texas. It pollutes water, air, and marine organisms. We breathe in polluted air, expose ourselves to toxic water, and eat animals that may have been in contact with toxic chemicals.

This painting conveys the gravity of the piled-up trash to our survival and to our health. We need to take responsibility for our own actions before our natural environment becomes uninhabitable.

By smleo in Season 4, Vol 4.5 on December 6, 2016.
← 1-Take Video: Lactase Persistence Yesterday, Today, and Tomorrow: Reflections on Miller’s The Crucible →