Artist’s Note: In Advanced Studio, I began working on theme of “environmental crimes.” All of the pieces below, however, were produced outside of class.

Environmental crime and excessive use of natural resources are excellent examples that show how grave this matter is. Gas, which is a key representative factor in this artwork, is one of the many nonrenewable natural resources. This means that once we use it all up, there is no more left for us. Although people do know that gas is a nonrenewable fuel, they still choose to continuously deplete it.  END_OF_DOCUMENT_TOKEN_TO_BE_REPLACED

Editor’s Note: The students were charged with designing an experiment to determine if five individuals were or were not lactose tolerant. After designing and completing the experiment they were given instructions on publishing the results in a 1-take video (instructions at bottom of the article).

Please click here or on the image below to see Cricket’s video on lactase persistence: 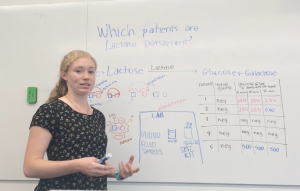 END_OF_DOCUMENT_TOKEN_TO_BE_REPLACED

This past fall season, I participated in the“Three-Minute Film Project” course that as part of St. Mark’s Saturday. The goal of the course appears basic: each group of five to six students were to produce a complete three-minute film by the end of the seven-week Saturday course. What was not basic, however, was making a good complete film. Three minutes may like a blip of time; in fact, some might even wonder how seven weeks could be spent working on mere three-minutes of film. It’s challenging. END_OF_DOCUMENT_TOKEN_TO_BE_REPLACED

Lindsay Nielsen Photography: Remarkable in the Unremarkable and Exceptional in the Unexceptional

By Lindsay Nielsen, VI Form
“There are always two people in every picture: the photographer and the viewer” – Ansel Adams (1983)

My  first camera was a $200 Nikon Coolpix that I bought with all of my babysitting money the summer I turned 13. I had always loved photography and the idea of capturing moments we can’t get back. When I got older, I started watching Youtube videos and teaching myself how to take more advanced pictures. My mom was always asking me where her Canon DSLR was, because I would constantly borrow it to take photos of our two Vizslas. During sophomore year my godfather, Joseph Ratner, gave me his old Nikon D3100 and I was elated. It was my first serious camera, and I had every intention to make the most of it. Photography has always been a passion of mine and it was an amazing moment hearing that I was one of the recipients of the Class of 1968 Grant. I built this portfolio the summer after my junior year and I will continue to use my camera to capture everything around me.

END_OF_DOCUMENT_TOKEN_TO_BE_REPLACED

The controversies over the existence of God or the validity of religious beliefs derive from a lack of tangible proof. Religious doctrines, unlike mathematical equations or scientific formulas, are usually proposed without a sequence of logical inferences backed up by repeated and consistent observations. Therefore, the question lingers whether a consensus is attainable among us regarding a universally accepted proof of a deity. My answer is no. Nevertheless, we can still know God. Religious and spiritual experiences rely on the self. The uniqueness of each individual’s perception of God makes it impossible to establish a defined path to the objective knowledge of God. However, we can know God through a subjective point of view, and the validity of the knowledge of God should not be diminished by its subjective nature. END_OF_DOCUMENT_TOKEN_TO_BE_REPLACED

Maturity and Youth: Connection in “For Esme, with Love and Squalor”

Maturity and Youth: Connection in “For Esme, with Love and Squalor”

In J.D.Salinger’s novel, The Catcher in the Rye, the rebellious teenage protagonist, Holden Caulfield, leaves school and wanders in New York City, trying to resolve his hatred towards the ingenuine, superficial adult world and his nostalgia of youthful innocence. The theme, conflict between youth and maturity, is continued in Salinger’s short story, “For Esme, with Love and Squalor.” The story takes place in an English town where American soldier Sergeant X prepares himself for battle and meets Esme, a 13-year-old girl who has recently lost her parents in war. They have a good conversation, at the end of which they promise each other to exchange letters. After D-Day, Sergeant X experiences a mental breakdown and loses the courage to live, but the arrival of Esme’s letter brings him strength to continue living. In this story, the wartime and battlefield are representative of the dark sides of society, and the two characters are symbols of adults and adolescents. By describing the connection between Esme and Sergeant X, Salinger proposes that youth and maturity can resolve one another’s struggles and fight against the downsides of society. END_OF_DOCUMENT_TOKEN_TO_BE_REPLACED