On Knowledge and Knowing God

On Knowledge and Knowing God

At the heart of any civilization lies a fundamental core centered on religion. Many great empires have risen and fallen, while maintaining their devotion to some kind of transcendent being or reality. Ethics, morality, governing laws, and codes of conduct all stem from some kind of religious or higher rule. However, the being that has created these ideals always comes into question when one is deciding whether to follow these “rules.” This brings about the discussion of God’s existence. Is it possible to know God? Can we prove his validity? Is this knowledge truly sound? What even is it “to know?” The question of God is a complex one, furthered by the complexity of the phrase to know. To fully grasp the notion of knowing god, it is essential to comprehend the notion of knowing.

Therefore, I present a three-tiered perspective on knowledge and knowing God. There are three forms of knowledge: Perceptional Knowledge, Collective Knowledge, and Real Knowledge. By exploring these three variants of knowledge, it is possible to validate a knowledge of God and the noumena.

The first type of knowledge comes from our own perceptions as individuals interpreting the world. This type of knowledge is the most personal, relating only to one’s comprehension of what is happening to them, thus rightfully earning the title: Perceptional Knowledge. Perceptional knowledge allows each individual to take in his or her surroundings and accept them as truths. Considering a daisy, you may say that it is black, while I may say that it is white. However, we are both right if we are speaking in terms of perception. Your reality is simply that you see the petals as black. Our perceptions and experiences dictate how much we know. However, this is not to say that these perceptions are false. In terms of the daisy, we could have been seeing the same color, but putting different words for it. In that case, we are both right. Or, we could have been seeing different colors, and only one of us is accurately defining the color of the flower. This scenario proposes the challenge of Real Knowledge, which I will discuss later.

Nevertheless, the notion of Perceptional Knowledge is not new. I simply reinvented it into a larger definition. In An Enquiry Concerning Human Understanding, David Hume suggests that nothing exists apart from its properties, and therefore our experiences are reality. When stating that our thoughts are “confined within very narrow limits” in comparison to the common notion that “[they] seem to possess unbound liberty,” Hume insinuates that our understanding of the world is limited to our interactions with it, rather than our thoughts, as Descartes believes. Similarly, Kantian Synthesis expresses the notion that we cannot know things apart from our experiences with them. However, Kant adds that things could still exist outside of these experiences. This theory further upholds the concept of Perceptional Knowledge because while it is based solely on interpretation, there could be realities that individuals overlook. As a result, Perceptional Knowledge provides a sound argument for the ability to know God. If your interactions with the universe bring you to the understanding that God exists within our world, then through your interpretation of the world, you know he is real.

Collective Knowledge is the second tier. This is the knowledge that people all agree on, whether it is true or not. Through this lens, something is itself solely because we have agreed on it. For instance, the table between a group of people at dinner exists because those people agree that it exists. Here, the collective decides to classify something as a truth, so it is easier to spawn other truths from it. In this sense, it is a variation of Perceptional Knowledge. It is a perception that the masses agree on and declare to be true, even if it really is not. So, if one person were to come up and declare that the table is not really there, the individual would be both right and wrong. In the perceptional sense, the outlier is right. He or she judges the existence of the table through his or her interpretation of the world. However, the individual is also wrong because the collective has decided to believe that the table is real, thus forming Collective Knowledge.

This interpretation of knowledge leaves much room for error. How many people must agree on something for it to become Collective Knowledge? To this, I have only one response: the more people in agreement, the more valid the knowledge. If the whole world agrees on the table’s existence, then it is fairly clear that it is Collective Knowledge. However, as less people begin to accept the collective truth, the more open it becomes to interpretation. What is important to understand is that Collective Knowledge is centered on the notion that the public decides what they know. The knowledge of God comes into debate so often because the public has not yet decided if it is possible to know God. Thus, there is no way to determine whether it is possible to know God through Collective Knowledge, leaving the question to Perceptional Knowledge and one’s own understanding.

In Conjectures of a Guilty Bystander, Thomas Merton describes an unprecedented understanding of people around him. He declares that this understanding “cannot be seen, only believed and ‘understood’ by a peculiar gift.” His statement exemplifies the notion of Real Knowledge. The “gift” is the actual knowledge itself, of which Merton claims to have caught a glimpse. While this is not possible because only the universe can have it, Merton presents an important point. By saying “if only [people] could see themselves as they really are,” he accepts that there is an ultimate knowledge above all our interpretations. We know ourselves through Perceptional and Collective Knowledge, but there is a higher tier that we will never be able to reach. To an extent, Merton furthers the notion that there are two contrasting forces: perception and reality.

However, this conception seems to contradict my initial statement of knowledge being three-tiered. The truth of the matter is that there are three tiers, but the third is set in so much more truth than the other two that they first two can be grouped together. Intrinsically, Perceptional and Collective Knowledge are both based on perception, just in different forms. Therefore, it is possible to say that Collective Knowledge is simply a variation of Perceptional Knowledge, which brings us to only two categories: Perceptional and Real. Whichever way you look at it, Real Knowledge transcends the other two and is the ultimate truth to everything.

What “actually happens,” or Real Knowledge, serves us no purpose because we can never achieve that level of understanding. Our perceptions are what matter the most because that is how we experience reality, whether our experiences are distorted versions of truth or not. Collective Knowledge keeps us grounded and allows society to function by establishing universal truths that we base all other truths on; it provides us with an easy system to follow. In essence, what is actually happening does not matter because we will never come across it. Therefore, it is possible to know God perceptually or collectively, if that is how you or the collective experience the world. 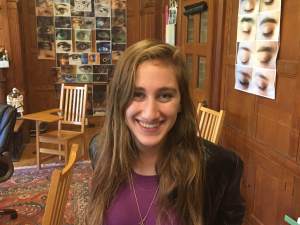 Natalie Novak is a VI Form day student from Southborough, MA. She enjoys thinking, reading, and discussing all across the curriculum.