Desi and I stood outside the bedroom, laughing hysterically as we banged on the door. We had just been locked out of the room for the second time for a reason I could not remember, most likely Natalie and Amanda ganging up on us. Nothing was funnier to us than being stuck on the other side of the door, the four in the room giggling as they listened to us struggle. After about five minutes of the insanity, the priest, Père Reginald, walked out of his room and stared at our red, smiling faces. As he watched the scene carry on, we suddenly stopped, afraid that we had disturbed him. He signaled for us to carry on, smiling at how hard we were trying to get them to open the door. This time, instead of his usual wave or quiet “hello”, he approached Desi and me with the biggest grin on his face. He joined our pounding, this time adding his deep voice saying, “This is the priest. Open the door!” We laughed even harder as he continued trying to talk to them, knowing they wouldn’t listen. He joined our laughing, his jolly laugh filling the room.

We were shocked. Shocked in a good way, the best way.

Père Reginald had been shy, not one to join the kids’ fun or to talk much. He was extremely polite, making sure we were taken care of, then respectfully excusing himself. However, this was a completely new side of him that we had never expected to see. He panted, rubbing his stomach as he continued laughing. He threw his head back as we continued banging on the door and the insanity had grown louder and louder. Suddenly he yelled, “I know what to do!” Grabbing a butter knife from the table, he giggled as he stuck it through the doorframe. Desi and I stood back, confused and slightly alarmed. As he continued jiggling the knife, we suddenly realized that he was trying to pick the lock! Our laughter exploded again: our shy priest had turned into our new best friend, with his lock picking and uncontrollable laughter. One final push of the knife and the door opened, and we ran inside to see the other four sitting in the room, with looks of utter surprise on their faces. We were in! All thanks to Père Reginald, that is. We turned to him and shouted “thank you!” as he continued laughing at us. “You HAVE to teach me that!” I said excitedly as he stood at the doorway. He nodded emphatically and walked back to his room, still chuckling.

The next night, as our stay at the rectory drew to a close, Père Reginald remembered one more lesson he still had to teach. Lock picking! He motioned for me to get up from the dinner table. “It’s time for me to teach you!” I couldn’t have been more excited and we once again began to laugh, the entire table joining in. He quickly demonstrated and then handed me the knife and guided my hands. As I finally jiggled the door open, I threw my arms up triumphantly. I had done it, and I looked around to see everyone clapping for me and laughing. I felt extremely proud of my new skill, if only so that now I knew I could protect myself from Amanda and Natalie the next time they tried to lock me out. Although I knew how much I would learn from the trip, I never expected to learn a skill like lock picking. Watch out world! Thanks to Père Reginald, locked doors no longer stand in my way!

Please check out the Haiti Partnerships’ blog, “Hollers from Haiti” by clicking here.

Riya Shankar is a IV Form day student from Southborough, MA. She enjoys music and plays the violin. She joined the Haiti Partnership Committee this year and traveled to Haiti in January. 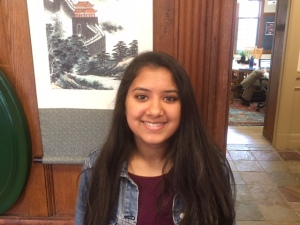