Home » Season 3 » Drawing Under the Surface

Drawing Under the Surface

Drawing Under the Surface

By saying that I am an artist, I am not implying that I am the best at drawing straight lines or perfect circles, or that I am capable of copying an object exactly as it is onto paper. Those impressions simplistically constitute a one-dimensional definition of an artist. Art, no matter in the form of painting, sculpting, or printing, serves as a means for the artist to convey thoughts, emotions, and ideas. While the endeavor of an artist to make a piece of work visually appealing is generally well-known, the artist’s message or intentions are often left undiscovered to floating audiences who only give hasty glances at the work. A piece of art loses its initial meaning that remains exclusive to the artist and his or her family and friends. However, there is a power in every artwork to impact a larger group of people. Over the past year, I have aimed to give my own work more purpose and meaning for myself and for others.

I drew my inspiration from a love for animals. In the beginning, it was a shallow feeling of love void of much responsibility or knowledge of unfortunate animals suffering in dire habitats like the Pacific Gyre. However, I had to take off my oblivious mask and acknowledge the reality when I delved deeper into the subject as an artist. As part of my concentration for the AP Studio portfolio, I produced two contrasting pieces: one portraying a cat with a harmonious family and another depicting a stray cat used for dissection. Among the many messages inherent in this piece, the obvious one concerned the issues of animal experiments and abandoned pets. I started this piece when my friend from Cranbrook told me about her experience with dissection in biology class. These cats and many other animals used in experiments are homeless creatures in the reach of Class B dealers, who then sell them to universities and research centers. Nevertheless, animals that have been rescued and placed in animal shelters are not protected from the danger of death either. In Korea and many other countries, there is a two-week span for abandoned pets to be adopted before the fates of euthanasia. The local animal 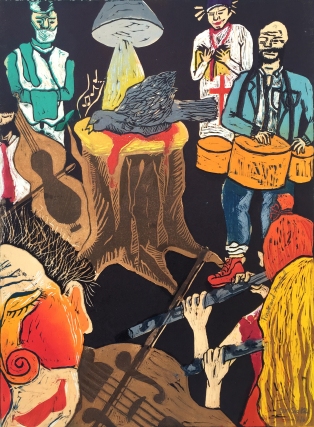 shelter that I volunteered at over the past few years, however, chooses not to abide by this rule and currently raises over seventy dogs and cats. However, the shelter is always short on funding, and I had always wanted to do something in my power to support its cause. After finishing a series of artworks centered on abandoned animals, I was able to hold a donation exhibition with several other artists and inform people of the animals in such harsh conditions and the efforts made to provide better care for them.

During my solo exhibition this past spring, I collaborated with an NGO group named Sae-Um-Tue. Sae-Um-Tue offers protection to women who were former sex slaves during the Korean War. The women, aging up to eighty years old, made soaps and eco-bags with my main pieces inscribed in them. To raise awareness about the existence of such victims who have not yet received the appropriate apologies from the various nations, I sold these items during my show and donated the money to the NGO group. People came by to see my work, but left talking about the issue of such neglect cast on these women. The main piece of the exhibition, the Song Bird, depicts a dying songbird lying on a tree trunk singing its last notes while an orchestra group surrounds the bird and plays deafening music that overpowers the little creature’s faint sound. The members of the orchestra have aloof expressions and do not face the bird, and this sense of neglect reminded me of the overlooked victims of the war crimes. Over 1200 dollars had

been raised for donation. Later, when I heard that a group of these women, who were suffering from symptoms of agoraphobia and had initially turned down my invitation to the opening, secretly came to see my exhibition, I was confident that I succeeded in giving my show and work more than a one-dimensional purpose. By conveying compassion towards the women in my artworks, I had prompted them to take another small step away from the unforgettable pain.

Being an artist is like adding a donation to whatever you believe is the cause. I wish to add more meaning to my artistry: one that not only enhances my skills as an artist but also fulfills the void with what makes me a stronger activist. 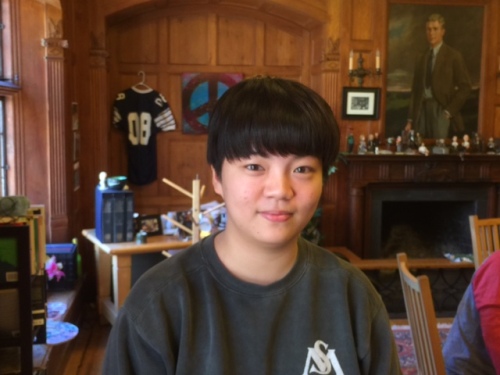 By smleo in Season 3, Vol 3.4 on November 10, 2015.
← The Circadian Clock and The Adverse Effects of Elevated CAT Level Memoirs of a Self-Professed Drama Geek →