This Window, Ms. Ramirez’ Advanced Spanish Language and Culture students have been studying the challenges facing many families and communities in the developing world. Lack of access to resources hinders many communities’ ability to improve their economic standing. Traditionally, charitable organizations have made the mistake of forcing their help upon the locals and these organizations tend to ignore the culture and the opinions of the locals, making the situation worse. NGOs (Non-Governmental Organizations) often fail to realize that the best way to aid locals is when they want help and ask for it. These organizations should allow the locals to take the lead with ideas and then help to implement them. This strategy yields the greatest success because the people provide practical local knowledge to solve their own problems and the NGOs can help with connecting people and providing technical assistance.

The problems associated with traditional NGO attitudes are expounded upon in Ernesto Sirolli’s Ted Talk entitled, “Want to Help Someone? Shut Up and Listen!”  Sirolli was an aid worker in Africa for many years for Italian NGOs and saw a lot of damage done by well-intentioned people. He shared a story about how his foreign NGO arrived in a Zambian village and noticed that the people did not grow crops in their fertile valley.  The Italians decided the people must not know how, so they planted vegetables and taught the people how to farm.  However, after several months, a large number of hippos came through and destroyed the crops before they could be harvested. The charity workers asked why the villagers never told them about the hippos, to which they responded, “You never asked.” This story emphasizes Sirolli’s point that the local people have to take the lead for a development project to be successful. According to Sirolli’s philosophy, micro-loans are a perfect solution because the ideas for the projects are initiated by the people seeking funds.

Our next step was to investigate an organization called Kiva. This organization effectively distributes resources in the form of micro-loans, which help people in need of resources get microcredits to pay for capital investitures. Micro-loans are small loans, sometimes as small as $25.00, that are granted to people who would not normally be eligible for bank loans. Kiva was founded by Matt and Jessica Flannery, who both sought to make a positive difference in the world. They were ridiculed by people who said their idea would be useless and ineffective and that poor people would never repay the loans. Nonetheless, Matt and Jessica’s venture has been highly successful and they discovered a way to change the world— one individual or group at a time. Kiva is unique in the way that the loaners are not donating money, they are investing it, so it does not put the loaner at risk and micro-loans are known for having a very low rate of payment default. This may be important to anyone who wants to collaborate with potential borrowers in the developing world, but may not have the financial ability to donate large sums of money or assume large risk. The loaner will be repaid in full as explained in the loan agreement. Though it may not be evident at first, this loan system benefits the recipients more than a donation because people have a tendency to become reliant on donations and never become financially independent. Furthermore, the patronizing relationship that results from unwanted help from Western countries that Ernesto Sirolli describes is avoided and replaced by a relationship of mutual respect.

In our class we broke into pairs and researched people who had applied for loans through Kiva. Each group chose one compelling project and imagined we were pitching their project to Spanish-speaking investors.  Then we translated their proposal into Spanish and created a pitch video.  Our projects represented individuals or groups from Laos, Cambodia, and Costa Rica and supported such diverse projects as bringing water filters to villages without clean water, helping a family educate their children and buy more supplies for their store, and helping a man receive a higher education in order to become a teacher.

We conducted half of our research in Spanish and translated the quotes used in this article from Spanish to English and translated the information we found on Kiva from English to Spanish.  Knowing more than one language opens up a whole new world and multiplies your access to online and other academic and news sources. Additionally, being able to fluently speak and write in another language allows you to reach a larger audience with advertising, marketing or education. Below, please view a video made by Marissa Feller ‘16 and Eric Mulvey ’15 that we chose as a good example from our class. It’s in Spanish but even if you do not understand Spanish, the graphics and music will help you understand the gist of what we are saying. ¡Disfrútenlo! (Enjoy!) 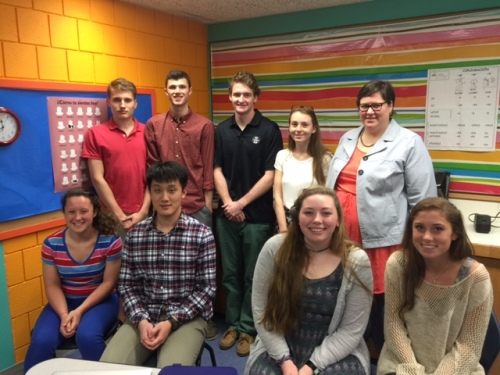