Coco Xia offers insights into her work in biology by submitting two different types of assignments: a flowchart on Malaria and a case study recommendation about Rasmussen’s Syndrome.

I hope you are well. This is the team of Dr. Singh, and we are writing this letter to offer our recommendation for the next step regarding Jerrod’s epilepsy treatment.

Just to summarize what happened again, Jerrod’s epilepsy started with symptoms including blank stares, unusual head movements, and muscle tightening and twitching. All of these are called seizures, which occur when there’s a sudden increase of electrical activity between neurons, leading to short abnormalities in muscle control, movements, behaviors, and so on. We gave Jerrod an EEG (electroencephalogram) test, and the image below shows the result. The particular pattern of spikes in his neural activity is quite noticeable, confirming that he has got partial seizures where a specific part of his brain is affected.

Another test we ordered for Jerrod is the MRI scan, in which a detailed picture of his brain is taken. His first MRI scan was fine, yet his seizures quickly escalated as his second MRI scan revealed abnormal areas in his left hemisphere. The cerebrum is divided into the left and right hemispheres with the left mainly controlling speech and comprehension. The malfunction of Jerrod’s left hemisphere has led to his temporary loss of speech and awareness, as you have observed. We used multiple sets of medications to alleviate his symptoms, but all of them failed as his seizures became more frequent and severe. We determined that Jerrod has Rasmussen Syndrome, a rare type of epilepsy mostly occurring only in young children under the age of 10 and occasionally in adolescents and adults. This disorder shows immune system cells, the antibodies, entering one hemisphere of the brain and causing pervasive inflammation and damage, but its exact cause is not yet discovered (1). As a result, Jerrod has experienced an increased number of seizures, short loss of motor skills, and temporary paralysis on the right side of his body. Anti-epileptic medications usually cannot eliminate seizures caused by Rasmussen’s Syndrome (1). 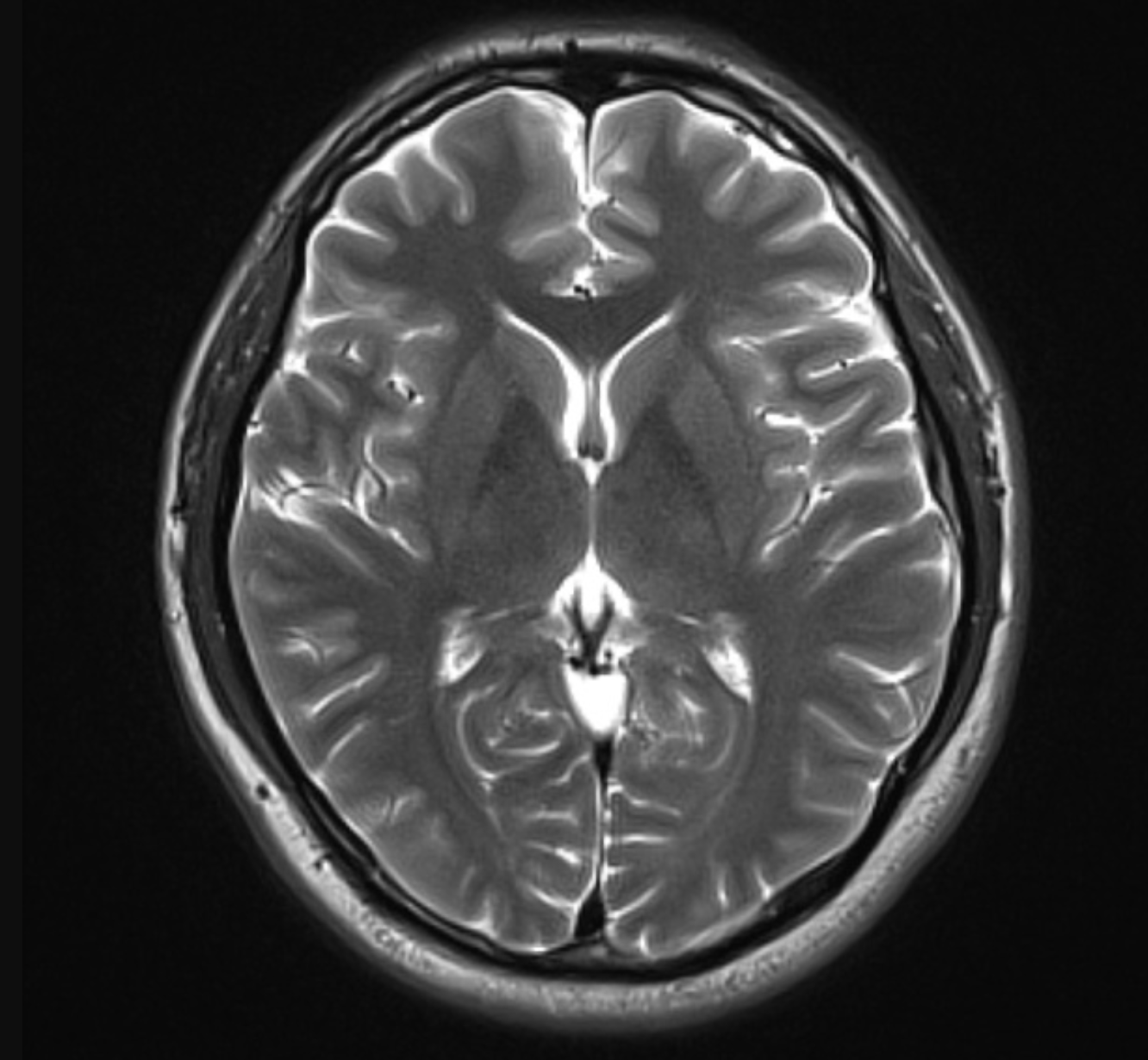 In Jerrod’s first MRI (above), the hemispheres appear to be relatively symmetrical and healthy with no obvious abnormalities. 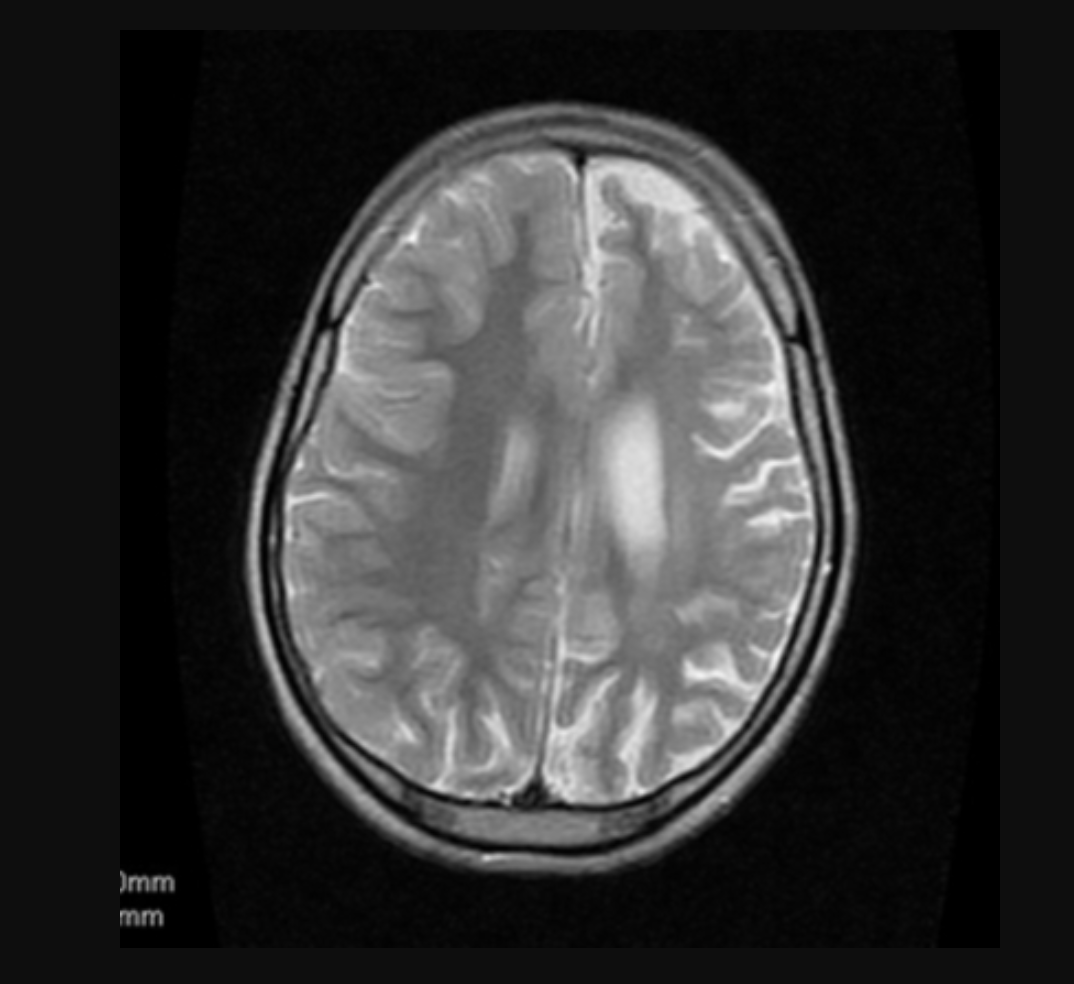 In his second MRI scan (above), we can see that there is an apparent white patch on the left hemisphere of his brain (on the right side of the picture). The white patch indicates a lesion, or the region suffering from a large number of seizures.

Given his current conditions, we recommend Jerrod to get a functional hemispherectomy, which is a surgery removing one hemisphere of the brain that is suffering from seizures (2). We will remove his left temporal lobe, his left frontal lobe, and part of his parietal and occipital lobes. We will also need to sever the corpus callosum, a tissue connecting the left and right hemisphere while leaving his thalamus, amygdala, hippocampus, and other deep structures intact. After the surgery, a group of experienced specialists will take care of Jerrod during his rehabilitation process where intensive physical and speech therapy will take place. 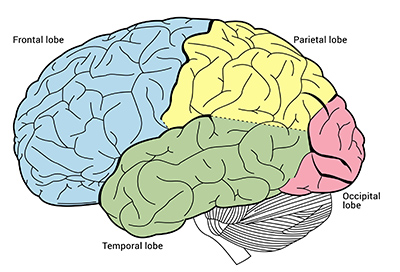 Here is an illustration of the lobes on the left hemisphere of Jerrod’s brian. The frontal, temporal, and parietal lobes are all in charge of language and speech-related functions, such as controlling language-related movements, understanding spoken language, controlling verbal communication, and so on. The occipital lobe is mainly responsible for vision. 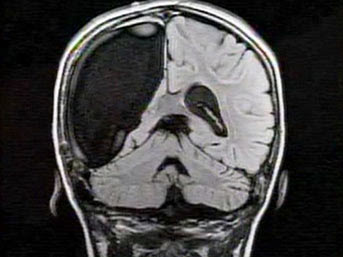 This is what will happen during the left functional hemispherectomy. We will remove certain lobes on the left side of Jerrod’s cerebrum to eliminate seizures that likely originated from one of the lobes in the left hemisphere. The right hemisphere will remain intact. The corpus callosum will be severed.

The first reason supporting our recommendation is that hemispherectomy can significantly reduce and possibly eliminate Jerrod’s seizures. As his left hemisphere becomes disconnected, the susceptible area of the cerebrum will be removed, allowing the brain to re-establish the healthy level of neural activity and communication. As many as two-thirds of the children who undergo a functional hemispherectomy are completely seizure-free afterwards, with another 15 to 20 percent having a substantial reduction of seizures (2). The success rate of hemispherectomy is very high, with 70 to 80 percent of seizure-free outcomes (3). It is likely that Jerrod will become seizure-free after the surgery, and if he still experiences seizures, they will likely be at a much lower frequency and intensity. If that happens, he will continue to receive antiepileptic medications for several months for full recovery. A functional hemispherectomy is the safest and most effective known way of treating Rasmussen’s Syndrome because of its visible success in reducing and eradicating seizures.

Jerrod will experience problems immediately after his surgery, but his rehabilitation should work out fine. We will remove his left frontal lobe, left temporal lobe, and part of his parietal lobe, so his speech and language-understanding abilities will be impacted after the surgery. But Jerrod’s recovery potential will be very high because he is still young with strong neuroplasticity. He will be unable to speak or make effective verbal communication with others. His vision will also be temporarily affected because part of his occipital lobe is removed. Fortunately, Jerrod’s young age has given him a high brain neuroplasticity, meaning that his brain is relatively flexible at forming new synaptic connections and learning new things. As we grow older, our nervous system will produce an increasing number of gamma-Aminobutyric acid (GABA), which is an inhibitory neurotransmitter that stabilizes cognitive biases and prevents new connections from forming (4). Since Jerrod is only seven years old, his mendable brain does not have a lot of GABA neurotransmitters yet, explaining why he can quickly re-acquire lost abilities during rehabilitation as other parts of the brain pick up important functions. It is lucky that we can reduce the impact of the hemispherectomy by harnessing Jerrod’s neuroplasticity thanks to his young age.

The surgery may sound extreme, but it is important for you to consider the downsides of other alternatives and the consequences of not receiving a hemispherectomy. First, seeing Rasmussen’s Syndrome as a disorder caused by the immune system, you can consider using immunosuppressive treatments or immunotherapies. Jerrod can be treated using steroids, an anti-inflammatory medicine. Some studies indicate that long-term treatment might bring positive effects, but since this method has only been tried in small and uncontrolled patient series, the results are not fully representative and comes with its own risks including the same frequency of seizures despite medication (3). A study in 2007 showed that 6 out of 11 patients aged from 2 to 14 years received no benefits from steroids, and continuous relapse persisted for the other five patients (6). I would not recommend this option over surgery because of the limited understanding we have on its efficacy and its downsides that are revealed in specific cases.

You can also consider intervening with intravenous immunoglobulins (IVIg), a medicine of antibodies. I would not recommend this treatment either. Although this medication fights off infections to a certain extent, it does not eliminate seizures or prevent the deterioration of motor function. In a study done in 2003, only 23% of the patients treated with IVIg showed reduced frequency in seizures (6). On the other hand, motor function was aggravated in as much as 62% of the patients treated by IVIg as they also underwent continuous cognitive decline (6). Therefore, although IVIg does provide some alleviation in terms of seizure frequency, it does not prevent functional damage and only postpones the dates for an actual, beneficial hemispherectomy. In summary, you can still choose to continue Jerrod’s treatment with multiple antiepileptic medications, but since the drugs are unable to cure the syndrome and only complicates it, we do not recommend further medications and suggest a surgery intervention.

We hope that we have helped you get some ideas of what to do next. Getting a hemispherectomy is our recommendation for now because of the visible post-surgical improvements and the high recovery potential despite the heavy recovery period. Please also keep in mind the risks of other options as you make a final decision. Please do not hesitate to contact us with further questions or concerns that arise.

Best wishes for the future of Jerrod,

Coco Xia is a fourth-form boarding student at St. Mark’s. Among all the intriguing natural sciences, Coco is particularly passionate about biology, and she loves spending her free time birdwatching and photographing wildlife in nature. She also enjoys reading fiction and writing stories. Also, Coco loves her squash team and always cheers for her teammates!