What My Brain Learned via the Dissection of Another

What My Brain Learned via the Dissection of Another

Before walking into class on Monday, I was filled with curiosity and excitement. It has been six years since I saw an 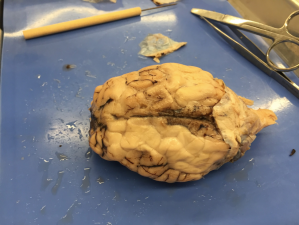 actual brain, and I was barely engaged at that time – although there was a parent who worked with brains and explained the information to us, no actual dissection was involved. The closest I got was holding the brain in my hand

My anticipation began to build during the “instructing” phase. Two feelings stirred inside me: one, I would be able to see everything that I learned in the past two weeks, and two, I was going to feel like a surgeon while using the scalpel. I made sure, however, to be careful: the way it sliced during Ms. Lohwater’s demonstration was enough to curb my excitement.

Immediately, I noticed two things when we took the brain out of the plastic wrapping. I did not anticipate the amount of preservative liquid that was in the packet, and there was a piercing smell in the liquid which reminded me of the smell when rubbing alcohol is combined with plastic. We also noticed how “messy” it looked. We were not able to immediately orient ourselves with identifying the ventral and dorsal surfaces. Furthermore, we saw a small bit of “black matter” on the ventral side – we were later informed that the darkish colors were the result of blood vessels. Other than the dura matter, we were able to identify the brain stem, the cerebellum, and the cerebrum, which are the three prominent parts of the brain.

After the majority of the dura mater was cut, we saw the cerebrum easier. The last bit of dura matter was near the brainstem and cerebellum, which required Ms. Lohwater’s assistance to be ripped off. This part was very tough, as we were not able to rip it apart. We learned that it was meant to protect the posterior area of the brain so that the cerebellum would not become loose. Then, we used our needle to identify the different parts of the brain, such as the pituitary gland, the optic chiasm, and the pons. This was all done with the brain entirely intact.

The next part was what I was looking forward to the most – cutting the actual brain. Taking the scalpel out of the sheath, I made a medial cut from the anterior to posterior – splitting the cerebrum, the cerebellum, and the brain stem in half. I made sure to use the scalpel properly: holding it like a pencil and using the tweezers to guide my cut. It was strange how sharp the scalpel was. I barely put any pressure, and it still cut through the brain as if it was butter.

The cut revealing the inside of the brain felt like opening up a treasure chest. Immediately, we saw all the structures within. The first thing we noticed was the myelination of the brain. Structures such as the medulla, the hypothalamus, and the thalamus were distinctly whiter than the outer parts of the brain. Furthermore, it felt like rubber when we poked it with our fingers. We also noticed the myelination of the cerebellum, resembling a series of tree branches. As you can see in the picture, I am pointing to the corpus callosum with the needle. Curious about what lay between the cavity, we took our tweezers and opened the gap. Inside was something that resembled a string, which we identified as the fornix. The blackish mass superior to the corpus callosum were also blood vessels.

This entire procedure took two class periods to complete. Through this experience, I was able to see the individual structures I had only read about for homework. I was also amazed to actually see the myelinated cells. This brain must have belonged to a smart sheep because of the amount of myelin inside the brain. Of course, what we actually saw was the myelin of billions and billions of cells. I also learned a lot about myself – I learn better with hands-on experience. 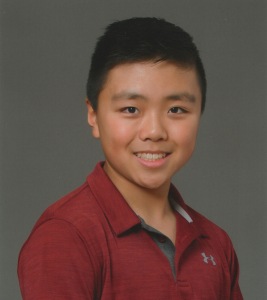 Julian Yang is a V Form boarding student from Chelmsford, Massachusetts. He plays hockey, rows, and enjoys photography and playing the saxophone.