Home » Season 4 » Into the Mystic with Thunderhorse: a Q & A

Into the Mystic with Thunderhorse: a Q & A

Into the Mystic with Thunderhorse: a Q & A

LEO: How did you form the band and who are the members and their roles?

Schmitz, and Shep Greene. Steven is on the vocals and has been singing since his middle school acting career. He is a member of the Marksmen and choir. George is the drummer, and he has also been playing since middle school. Cole plays the tenor saxophone and has been for seven years. A very talented musician (he is the only person to win the Massachusetts Association for Jazz Education’s “Most Valuable Player” two years in a row), he has been integral to the Jazz Band and now serves as its vice president. Finally, Shep plays the guitar. He has been playing since eighth grade, but started getting serious about it sophomore year.

LEO: What is one unique quality that each member brings to the band?

Thunderhorse: Each member has a very specific attribute that he brings to the group. As the only instrument that can play chords, Shep holds down the rhythm section. Primarily a soloist in our band, Cole adds flashy licks to brighten up our playing. George helps us keep tight while playing, and Steve’s leadership can help us through mental roadblocks.

LEO: When you began jamming together in your free time, when did it become clear that this was a good group to start doing songs with?

Thunderhorse: Cole and Shep started jamming first when we were bored, and then we realized that they could use Steve and George. However, as Steve is a vocalist, we would need to solidify entire songs so that we could add him to our sessions. After we went through our first few songs, primarily simple Green Day songs, we realized that we had a good dynamic going. We then applied for an “Independent Performance” as a band.

LEO: How did the process go for the Independent Performance?

Thunderhorse: Mr. Wallace, Arts Department Head, introduced a new Independent Performance music class, and we met with him to ensure that we could do this as a band. After revising the outlines of the class and meeting with us again, Mr. Wallace gave us the OK.

LEO: What do you envision as the goal for the May concert? How many songs? Any guests? A particular set list?

Thunderhorse: As a part of the requirement for the Independent Performance class, we are holding a concert in the PFAC for everyone to attend. As of now, we are hoping for a 30-45 minute set with approximately 6-8 songs. We are hoping that the criteria for songs is “Rock Through the Years,” where we will have at least one song from every decade starting with the 1950’s.

LEO: Are the arrangements and the song choices collaboratively arrived at or is there one “leader”?

Thunderhorse: Every song that we play was initially pitched by one person, but by the end is usually mutually agreed upon by everyone in the group. The arrangements are also something that one person will change, and then the rest of the group will give input to make it sound better.

LEO: When do you find the time to practice in the crowded SM schedule? How long are your sessions?

Thunderhorse: In addition to our class being held during Green block, we are required to play at least two and a half hours outside of class. To ensure that we succeed in this, we have created a schedule where every Wednesday, Friday, and Sunday night we play as a group together during study hall.

LEO: The first song that you performed publicly was Van Morrison’s “Into the Mystic.” Why did you choose that song?

Thunderhorse: “Into the Mystic” was a song that we knew we were going to play as a band before we even formally discussed it. The primary reason being the meaning that we found during our fall semester English class, Getting LOST; it was an integral part to the finale of our class as we examined the “afterlife” in LOST and the six major religions. As an homage to the meaning of the song, we all decided to perform that as our debut song. We all have a deep connection to the song for all of the aforementioned connections, so we did not need to feign any emotion or enthusiasm while playing and it was easy for us to get lost in the music. We found it to be such a beautiful, impactful, and meaningful song that we had to share our own version of it with the rest of the school.

Click here for the “Into the Mystic” live performance!

LEO: How did it feel to play in front of the school?

Thunderhorse: Playing in front of large groups of people is an amazing feeling, especially when you can tell that the crowd is into it. While we played “Into the Mystic” and “Hooked on a Feeling,” we could feel the energy from the crowd. As we are all nervous before performing, hearing the reaction from the crowd after just the first note is a big relief off of our shoulders and allows us to focus more on our music. Seeing the wave during “Hooked on a Feeling” is definitely a highlight of all of our St. Mark’s careers.

LEO: Are there any songwriters in the group?

Thunderhorse: Everyone in the group has contributed to an original song in some sense or another. George and Shep were in the Saturday class “Songwriting and Recording” and have recorded multiple original songs on digital platforms such as Ableton. As a band, we are currently working on an original piece titled “One Way Road,” and we hope to completely finish that before our concert in May so that we can debut our song in a more official setting.

LEO: Do any of you plan to pursue music in college or a potential career?

Thunderhorse: Steve plans to stick with his music career at least through college and hopes to join an a capella group at his school. Shep will certainly keep playing the guitar through college, whether it be in a gigging band or just for fun, and may even sign up for music theory classes. George and Cole are not committing themselves to anything yet, but see it as a possibility throughout their college careers and beyond.

LEO: Of course, everyone is wondering this:  what is the meaning of your band name?

Thunderhorse: We prefer that that specific part of our identity stays clouded in mystery…. 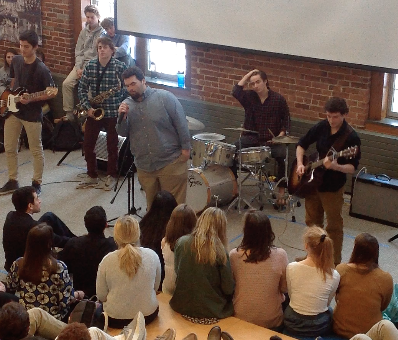 By smleo in Season 4, Vol 4.X on March 7, 2017.
← “I Simply Speak Best in Metaphors”–Creative Writing at SM Video–How to Sell the Story: St. Mark’s Beyond the Classroom →