An Inspiring Visit to Cambodia

An Inspiring Visit to Cambodia

I first came across the country of Cambodia when I had to read a book called The Clay Marble by Minfong Ho for a social studies class. It was about the life of a twelve-year old girl and her friend in war-torn Cambodia after the fall of the Khmer Rouge in the early 1980s. Since then, I’d been curious to learn more about this small country with a big history. This past summer, I final got the chance to see, learn, and experience it first hand.

I had read about the iconic temples, the rich history and culture, traditional street food—it all seemed like a typical Southeast Asian country that I have previously visited. Having spend a week there, I now know that it’s all of that and more. Cambodia is a country with a turbulent history, yet one full of hope for a better future. Not only do the Cambodian people respect their history and culture, they embrace advancements in technology and strive to become more modern.

One of the first things a visitor to Cambodia learns about is its history, in particular the brutal regime of Khmer Rouge. In the four years (1975-1979) that the Khmer Rouge ruled Cambodia, it was responsible for one of the worst mass killings of the 20th century, claiming up to two million lives. I visited various sites, such as a ‘killing field,’ a landmine museum, and met a number of interesting people, many of whom were survivors of this infamous period.

(Sareth), a passionate advocate who received a Nobel Peace prize on behalf of the ICBL, for the campaign to ban landmines. Like many during his time, his family was forced to leave the city by the Khmer Rouge. As a resistance soldier, Sareth stepped on a landmine which resulted in him losing both of his legs. When he eventually moved back to Cambodia, Sareth started making wheelchairs as a way to support himself and his family. Sareth designed wheelchairs that have been modified for Cambodia’s unpaved roads, using strong but cost effective local materials.

I joined Sareth in one of his wheelchair building sessions. As we built the wheelchair from scratch, he spoke passionately about how landmines were still in problem in Cambodia and many places around the world. “I hope my work doesn’t just benefit Cambodia, but also the rest of the world,” he explained. Seeing how much thought he put into designing a wheelchair and how he nimbly moved around, I admired his courage and willingness to give back to his country, despite the role it played in him losing both of his legs. Upon completing my wheelchair (serial #2K16222) and knowing that it will soon help change someone’s life, I felt a deep sense of accomplishment.

My visit to the landmine museum was also an eye-opening experience. Even up till today, one or two people in Cambodia are injured by landmines every three days; as of 2016, 1 in every 290 Cambodians are landmine victims, with over 40,000 people maimed (Haas). Millions of unexploded mines will lie buried, with unaware children and farmers setting them off. The museum was founded by a man named Akira, who was a former child soldier in the Khmer Rouge. At that time, any child taller than an AK-47 rifle was recruited to fight and lay mines in the ground. After the war ended, Akira made it his lifelong mission to clear landmines in Cambodia and care for the orphans/victims of landmines. Until recently, Akira still used a simple technique to clear mines—with a stick and a pair of pliers. Amazingly, he and his wife defused over 50,000 mines!

Less than 30 minutes by Tuk Tuk outside the major cities, you arrive in a completely different world. Gone are the cars and the modern buildings. In its place, you find vast paddy fields, crude houses on stilts scattered around, and cows roaming the streets freely. Walking through the village, I saw many of the local people busy running small businesses, working in the fields, and constructing new homes. 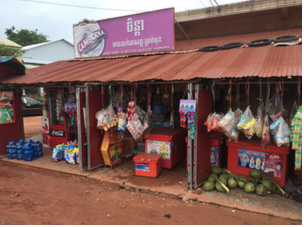 Even though it was early in the day, the younger children could be seen playing, while the older ones were working in the fields. It struck me that many of these children, especially in the rural areas, don’t actually go to school. Despite the evident poverty, my visit left me with a positive impression of a people who make the most of what they have and are willing to work hard to build a better present and future.

Cambodians are deeply religious people. When visiting many temples in Siem Reap, I met and spent time with two monks—both of whom were only slightly older than I but who have been monks for at least five years. I had an insightful chat with them, alternately in English and in Mandarin, since one monk had been learning English and was studying English literature at the local university while the other was learning Mandarin in preparation to be a tour guide.  I was impressed by how fluent and enthusiastic both monks were about speaking their non-native languages. I learned about their daily lives, such as how they had to wake up at dawn and leave the temple to walk with streets for alms-giving. They spend the rest of their day studying and performing ceremonies for occasions such a births, deaths, and weddings.

Monks lead a very regulated life and have to follow many rules. When I asked what was the most difficult thing when they first became monks, one said that it was not being able to eat after midday, while the other said it was being away from his family, whom he could only see once or twice a year. Despite this, they were grateful to be able to get a better life through education by coming to the temple. One of the monks then went on to tell me about his aspiration to study abroad and how he was inspired by the head abbot (venerable Somnieng Houern, who was a speaker at St. Mark’s School TedX in 2015), who studied at Harvard. After graduating, he would go back to his village to teach English. Again, I was struck by the spirit of the Cambodian people and how all kinds of people—city folk, rural folk, young, old—were striving towards willingly contributing to their country.

Foreign aid and volunteerism have been a big part of Cambodia’s rebuilding. I got to experience firsthand some social enterprise initiatives led by NGOs as well as local community leaders. I visited PEPY NGO, an education and youth empowerment organization, which supports disadvantaged youth to get further education and to find jobs. At PEPY NGO, Sarakk, PEPY’s founder and director, and I discussed the growing lack of opportunities for Cambodian children and PEPY’s mission. I met with some of the students and had a glimpse of their IT and English classes. I was impressed not only by the students’ enthusiasm for their work, but also how passionate Sarakk was about his job. While Sarakk’s office had no air-conditioning and was swelteringly hot, the students were studying in air-conditioned rooms. When I asked him about it, he chuckled, replying that the students needed it more than he did.

Of course, a visit to Cambodia isn’t complete without visiting Angkor Wat and some of the other well-known temples like Angkor Thom and Ta Phrom. They were firm reminders of what Cambodia was and what it can become. The photo of Angkor Wat before sunrise sums up well where Cambodia is and what it is heading towards: a new beginning after a dark past. 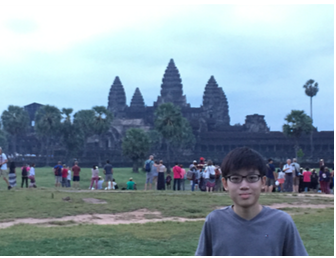 Since 1979, its population has had a dramatic increase, from 3 million to a current estimated population of 15 million. The majority of Cambodians who have escaped poverty still live in rural areas, often with minimal access to resources such as clean drinking water. Health and education remain an important challenge. Cambodia had a great impact on me. It opened my eyes to a new world, a world that I didn’t imagine would be so enriching. It was inspiring to see how a nation with such a war-torn history is rebuilding so quickly. I hope others will have the opportunity to visit and experience Cambodia first hand. 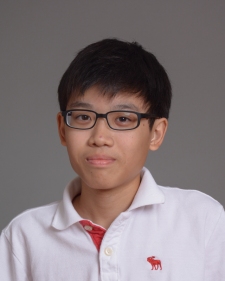 Ryan Yang is an IV Form boarding student from Singapore. He loves travelling to different places and experiencing different cultures, and he is a big fan of Arsenal Football Club.

By smleo in Season 4, Vol 4.9 on February 21, 2017.
← Video Oral Arguments: Literature on Trial I and Other: Thought to Address, with Nods to Kant and Sisyphus →