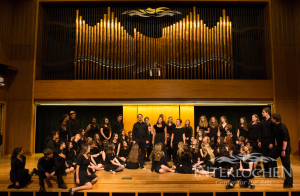 Not many people recognize the beauty of classical music. I might not deserve to say this because I was actually one of them before this summer. Attending Interlochen Arts Camp was by far the most engaging and life changing experience of my life in terms of the depth of what I learned and how I advanced into a better musician.

During winter break, I realized I wanted to spend my summer vacation playing and learning about music. I didn’t know of any good places, but fortunately Mr. Wallace did. He told me about many programs: Interlochen Arts Camp, Boston University Tanglewood Institute, Brevard Music Camp, and many more. I only applied to my top two choices: IAC and BUTI. I calmly waited for their calls.

In February, I heard back from both institutes. Both offered me scholarships. Before then, I was unaware of my own talent and wondered why a program would offer me money to attend. By everyone’s recommendation, I decided to spend my 6 weeks in Interlochen Center for Arts, located in Northern Michigan.

I arrived in Michigan after many long hours of flying and driving. Under the bright blue sky, I saw my home for the next six weeks. Birds were singing, squirrels were dancing, and sun was smiling- just like a fairytale. After unpacking my clothing and shower materials, I officially started camp.

It was much stricter than I had expected. We all woke up at 6:30 and went to class from 8:00 am until 4:00 pm. However, all the vocal major students were obliged to sing at the organization called “Festival Choir,” so our days usually ended at 8:00 pm.

The food was not satisfying either. I never have missed our school’s dining so much. I even lost 30 pounds at the end of the camp because of the quality of the food. 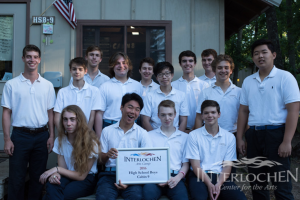 I really wanted to go home in first week and a half. Sleeping in a wooden cabin with 15 other people and the tough schedule made me more tired than I had ever been. However, as time progressed, I found myself enjoying the routine and the rhythm. Everything seemed more beautiful.

Spending so much time fully immersed in music is something people won’t understand unless they experience it themselves. A regular day for me at Interlochen included at least 4 hours of singing and 2 hours of watching performances. Everywhere at Interlochen was filled with music; there were always people playing their own instruments on streets. It seemed bizarre at first, but it became a part of my life.

Being surrounded by people who are equally passionate about what you love is incredible. You might feel overwhelmed but it is more likely that you are challenged to become a better version of yourself. You seek to work harder, make more beautiful sounds, and figure out how to entertain the audience. All of these things are pure joy to us musicians. The six weeks were so precious to everyone as we figured out our meaning of life, learned how to be musicians, and discovered what we wanted to do in the future.

At the last concert, all of us poured our hearts out. At the end, as expected, tears were everywhere. The feeling when you realize you will no longer be in the life that you’ve dreamed of with the people you love is just so sad. But at least there are many memories made to cherish for a lifetime.

The atmosphere was the most meaningful gift I received from Interlochen. All my peers at Interlochen still tell me about how much they grew compared to last summer. Words cannot describe how amazing my experience was. Starting as a singer, I became a musician, and a lover of music.

Below, check out some Interlochen promotional videos!