Home » Season 3 » Seamus Heaney: The Pen and The Spade

Seamus Heaney: The Pen and The Spade

Seamus Heaney: The Pen and The Spade

“The Forge” by Seamus Heaney expands upon the theme of strength that he first established in his poem, “Digging.” However, instead of exploring the similarities between using a pen and a spade like in the latter, in “The Forge”, Heaney examines the craftsmanship and beauty a blacksmith uses despite the force required to do his job. The bluntness of the short words used contrast with their meaning to create the image of a tough, rhythmic job that creates art. He does this similarly in “Digging,” where his word choice creates a non stereotypical image of farmwork, all underscored with the rhythmic act of digging. Linking both poems is not only the sense of wonder and appreciation the author holds for the two jobs, but also regret, because he can only recognize instead of participate in the art of their work.

Heaney uses a variety of short, blunt words to describe the blacksmith’s job, recreating the force used in the job with the way the words sound. Words like grunts, sparks, dark, slam, flick, and beat are mono-syllabic and consonant heavy. A poem is meant to be read aloud, and when you read these words, you can feel the beat of the anvil in the rhythm they create.

In “Digging,” a softer rhythm was created with iambic pentameter, as shown in a line such as, “over his shoulder, going down and down.” When read aloud, you hear the gentle back and forth of the words, similar to the louder and softer sound digging creates. In both poems, the poet uses his word choice and the sounds to illustrate the essence of the two different jobs he is describing.

Contrasting the length of the words in “The Forge” are their actual meanings. In one line, he describes a blacksmith’s workshop as a place “where he expends himself in shape and music.” This phrase shows that he looks at the job of being a blacksmith in a different way than most would. While it is built upon the force he must use, the actual act of doing it creates something new and useful.

Similarly, in “Digging,” meaning and sound create a different image of farm work than most might expect. With “nicking and slicing neatly, heaving sods,” he is describing a simple farm task. However, the rhythm of the sentence creates an image of something more special and important than a mundane chore.

While it is shown in both poems that Heaney holds the jobs in high regard, hidden in the subtext is his regret that he cannot participate in them. His father and grandfather both were farmers, yet his calling is in writing. In “Digging,” he says, “but I’ve no spade to follow men like them.” He was given a different tool, a pen, and while he devotes himself to mastering it, he cannot help but wonder what it would be like to be a farmer or a blacksmith. While writing is an interesting profession and allows him to observe these amazing things, it does not have the same physical rhythm like the jobs illustrated in “Digging” and “The Forge.” In “The Forge,” he writes, “All I know is a door into the dark.” That is probably all he will ever know and a cause of great regret for him.

In both poems, Heaney looks at jobs as more than a burden. He sees them as something special, and he takes time looking at these typical jobs through a new lens. While “The Forge” and “Digging” are different in that they describe different jobs, they are similar because both poems catch the very essence of tough work, which may surprising and more beautiful to some. He renders them carefully because of his respect for them, though that mingles with regret, as he will never get to experience what a blacksmith or a farmer experiences.

Logan King is a IV Form day student from Holliston, MA. She plays soccer, rows crew, and enjoys being outside. 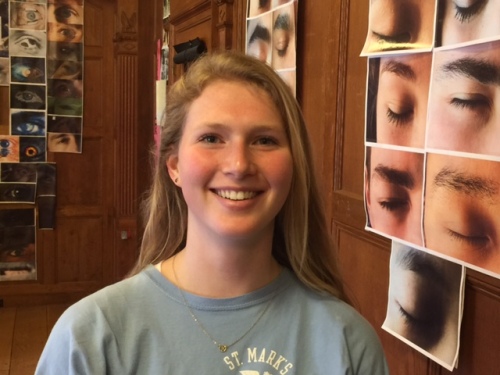