Comic Books and The Profound Effect of Pleasant Surprises

Comic Books and The Profound Effect of Pleasant Surprises

As I was signing up for my VI Form English elective course, I knew exactly which class I wanted to take: the “comic book class.” Erroneously assuming that I would simply be reading comic books and answering shallow questions, I made a fool out of myself by hoping that the class would boost my GPA. After all, it was a senior elective. However, from Hamlet to Watchmen, the material of the class prompted us to explore thoroughly what it meant to be heroic or anti-heroic in both literature and contemporary society. Most of the class time was spent discussing heroic and anti-heroic qualities of characters. Simply put, the class was not what I initially expected it to be. It was so much more profound.

“Look! Up in the sky! It’s a bird! It’s a plane! It’s… Superman!” For those who are familiar with Superman, this quote might pop up naturally in their heads when discussing Superman. Along with the quote might be slogans such as “Superman: the most powerful superhero,” “Superman: the most reliable superhero,” or even “Superman: the humblest and the most heroic superhero.” In whatever spin Superman is placed, it seems as though it would be impossible to depict him as anything but a perfect hero. Actually, that is not true. Completely based on the premise that Superman’s capsule landed in present-day Ukraine, Superman Red Son, the spin-off series of Superman, portrays even Superman, the epitome of human “goodness” and heroic behaviors, as an individual with questionable morals. Superman in this spin-off becomes “discovered” by Stalin and becomes the champion of communist values. When Stalin dies, Superman becomes the leader of the Soviet Union. Through his superpowers and extraordinary intellect, he leads the Warsaw Pact into a new golden age and expands the pact to a global level, eventually engulfing all nation states in the world except for the United States and Chile. He advances the Warsaw Pact, however, with an iron fist. Through constant surveillance with his super hearing powers, Superman maintains world peace and expands communism into various corners of the world. For those who actively protest against him, he installs mind-controlling devices in their brains, practically turning them into submissive robots. Regardless of his terrible human rights records that might parallel many despots of today, at the end of the graphic novel, Superman eventually saves the Earth by preventing a huge bomb from exploding and decimating the planet. What does this mean for the identity of Superman? Is he a hero? An antihero? A villain? This question was what made reading a graphic novel so much more difficult than I had ever imagined.

The mixture of heroic, questionable, and straight-out heinous acts offers the audience a depiction more complex than the typical depiction of Superman. In some ways, Superman in the graphic novel is a hero. After all, does he not place the Soviet Union and other nations in the Warsaw Pact in the leading positions of the world, ending the possibility of a nuclear warfare? Moreover, he still displays the classic signs of heroism by stopping catastrophic train crashes and by saving people from burning buildings. In fact, Superman manages to stop a crashing Soviet satellite from destroying Metropolis in the beginning of the graphic novel, saving millions of lives. However, when other less heroic acts are weighed in, such as attaching mind-controlling devices to people’s heads and maintaining high levels of constant surveillance using his own superpower, it should become the general consensus of the audience that a typical Superman – a superhero of justice and heroism – is so much more heroic than the Superman depicted in Superman Red Son.

To go another step further and express my personal thoughts, Superman in Superman Red Son is an anti-hero – maybe even an anti-hero that is closer to a villain than a hero on the hero-antihero-villain spectrum. Even though he might have eradicated the potentials of nuclear warfare and brought a new age of prosperity and joy in the Soviet Union, it should be remembered that if his reign were real, countless international organizations would be condemning the terrible human-rights violations of Superman’s Soviet Bloc – of course, if they were still alive and not yet turned into mind-controlled slaves by Superman already. Even though my view of Superman Red Son and Superman’s heroic qualities could be summarized in one paragraph, it took me almost a week-long contemplation to truly figure out who and what Superman was – one of the reasons why I found this class so much more challenging than I originally anticipated it to be.

From the first week of class, it became clear that my first senior elective was going to be shaped into a class completely different from my expectations. We discussed various topics including feminism and gender equality. Besides, we read Shakespeare. This class shattered the promise I made with myself after Fourth Form year that I would never touch another Shakespearean play. The comic book class that I thought I signed up for turned out to be a class that required profound thinking. However, the surprise was not a bad one: I enjoyed the class thoroughly. Not only did I learn more about contemporary topics such as feminism and familiarize myself with a whole new genre of literature, but I also learned a huge life lesson: there are such things as pleasant surprises.

Sean Kim is a VI Form boarding student from Seoul, Korea, Earth. He enjoys the clear blue skies of spring days and whistling while he’s on a stroll. 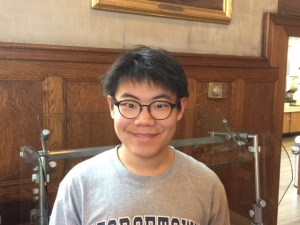