Home » Season 3 » The Syrian Refugee Crisis: Are We Doing Anything?

The Syrian Refugee Crisis: Are We Doing Anything?

The Syrian Refugee Crisis: Are We Doing Anything? 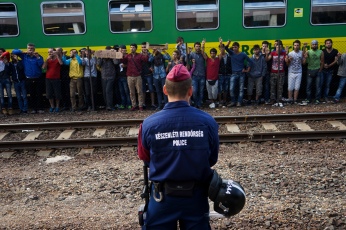 For centuries, the United States of America has promised hope for millions of people seeking freedom and safety. Our country’s rich history began with families facing perilous journeys in order to escape from religious persecution. Right now, as the United States faces the disastrous effects of the Syrian Refugee Crisis, remembering our history has never been more important. As thousands of people flee from their war torn homes, they desperately search for shelter. For refuge. Is the United States one of those places?

In 2011, civil war broke out in Syria as Islamic fundamentalists battled for power. The volatile war has affected over 12 million people thus far, 4.6 million of whom are Syrian refugees. The Islamic State of Iraq and the Levant, more commonly known as ISIL or ISIS, has grown and grasped more power in the Middle East, forcing more Syrians to flee for safety. The U.S. has accepted only about 2,300 refugees since the start of the war, and the government still struggles to agree on ways to become involved. As a leading world power, some argue that we must accept some responsibility by keeping our doors open to Syrian refugees. But political feuds are making it increasingly difficult.

Over the past couple of months, governors of over 30 U.S. states have announced their refusal to allow any Syrian refugees into their states in order to protect their citizens from the threat of terrorism. Regardless of the lack of power these governors actually have to make such a declaration, their fear is not uncommon, nor should it go unaddressed. In reaction to the attacks in cities such as Paris, Beirut, and Istanbul, fear is spreading rapidly throughout the American people. Will ISIS members be able to pass as refugees? Will our country be letting in terrorists? Are we truly safe?

The United States has truly worked diligently to make our vetting process, or the security screening process for a refugee, exceedingly thorough. The vetting process is so strenuous and long for refugees that it would be faster and easier for a member of ISIS to enter our country with a visa; entering the country as a refugee is the most difficult way to enter. Our vetting process has not always been this extensive, however. After the shocking and devastating attacks on September 11, 2001, the U.S. government has increased the vetting process in order to prioritize safety on U.S. soil. During the U.S. Department of State’s Background Briefing on Refugee Screening and Admissions held on November 17, 2015, state officials explained how the U.S. has equipped itself to properly examine incoming refugees. One official stated that the U.S. is prepared for the screening of Syrians; our current vetting process is “robust because of the experience that we’ve had since the beginning of large-scale Iraqi processing in 2007.” Officials say that our vetting process is safe, thorough, and ready. But hardly anyone is listening.

U.S. citizens are failing to acknowledge the protection our vetting process ensures. The fear of terrorism, which has incited a rise of Islamophobia across the country, has heightened tension in our government. After the attacks in Paris, President Barack Obama announced that he continues to stand by his plan for accepting 10,000 syrian refugees in the 2016 year.  In reaction to his plan, the House passed a bill in November that would entirely halt the amount of Syrian and Iraqi refugees entering the U.S. The bill stated that refugees would not be able to enter until national security agencies certify that they do not pose a security threat. Obama announced his intention to veto the bill if it was passed by the Senate. Fortunately, the Senate blocked the bill on January 20, 2016, effectively protecting the Obama Administration’s plans. Despite the numerous attempts by national security agencies to emphasize our secure vetting process, debates over our country’s safety are flooding the news. Republican presidential candidate Donald Trump proposed the closing of our doors to all Muslims, as well as proposed the idea of a database with which all Muslims would have to register. Reaction statement’s like Trump’s are contributing to the determent of any possible U.S. aid to the crisis. The Obama Administration continues to battle against the aggressive objections to acceptance of refugees, making any U.S. efforts minimal, if at all possible.

The Syrian Refugee Crisis is certainly a political issue, but it is also a humanitarian issue. As a country born upon the powerful belief in liberty, it is our duty to provide aid to Syrians seeking safety from the brutal war. The truth about our government’s response is this: little is being done, but there is potential for great work. If we choose to attack the obscene amount of Islamophobia and put forth plans to aid refugees, we can save lives and protect thousands from harm. Our vetting process will succeed, but it will take the trust of our citizens, and ultimately of Congress, to begin to aid the millions searching for freedom and safety.

Desmond Goodwin is a VI Former from Spokane, WA. She enjoys rowing and singing, and her favorite food is ice cream.