Some students have a background, identity, interest, or talent that is so meaningful they believe their application would be incomplete without it. If this sounds like you, then please share your story.

I’m just an American. Or so I thought. Growing up overseas, I was always associated with other multi-cultural kids who had a parent working for the American Embassy. As a result, I was an American and only an American. This was despite the fact I had spent more of my life out of the States than in it and I had a bi-racial background of being Finnish and Indian. When I decided to attend a small boarding school in Massachusetts, I figured I would have no problem adjusting to a new community in America. Since I was moving from Saudi Arabia, a country with a demanding set of religious laws to live by, I thought I could adapt to fit even the most extreme conditions. I had no idea that moving back to a country that I considered my own would be the hardest transition of my life.

During my first week of orientation, it registered that my knowledge of American culture was limited. The kids around me chatted happily about popular singers and celebrities, and I sat there in silence. As we went around the circle saying where we were from, I blurted out “America.” There was an abrupt silence, followed by a few chuckles. Apparently people weren’t considered to be from an entire country, but in fact broke themselves up into the different states. This was a foreign concept to me, as I was used to hearing Europeans, Arabs, Asians, and Americans as defining terms, not anything more specific than that. My identity began to crumble as I realized I knew very little about the country that I had been branded with for so long.

The question of where I was from bothered me immensely. In the student handbook, it stated that I was from Sri Lanka, where my mother had recently moved for work. Having only been to Sri Lanka once, I was very unfamiliar with the country. Yet since I was half Indian, being Sri Lankan was a concept people believed easily, much more than me trying to pass as an American, the only truth I’d ever known. Since my dad was living in Kuwait, I wasn’t able to explain the Finnish side of me either, even though I had grown up with the Finnish language and heritage. Having spent most of my life encased in Muslim cultures, those were the countries where I felt most comfortable. The truth was I had no idea what I considered to be home, as I had always just let the burden fall on America.

I tried to hide that I didn’t know where I was from, and simultaneously tried to pretend I fit into a prep school where people were so similar. Being different didn’t seem like an option at my new school, and yet that was all it took to finally fit in. As I stopped trying to be like everyone else and started accepting the different parts of me, people began to accept me as well. I realized that it was possible for me to consider multiple different countries as part of my life. I abandoned the concept of labeling myself, and decided to try explaining myself instead. While my life story was complicated, and often confusing, I enjoyed explaining the significance behind being Finnish, or Kuwaiti, or Sri Lankan. This allowed people to become interested in who I really was, and my new friends were a crucial part of helping me find my identity. After just a year I started to feel comfortable with the concept of being an American again, whether it was being just an American, or with the added benefit of all the different parts of the world that I’m proud to call home. 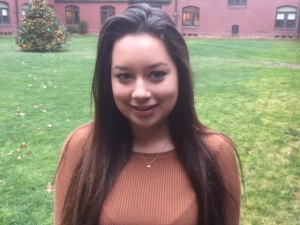 Veera Korhonen is a VI Form boarding student from Finland/India/Kuwait/Sri Lanka. She enjoys playing the harp, flying planes, and gallivanting around the world.

By smleo in Season 3, Vol 3.5 on December 8, 2015.
← Willing to Empathize with Another’s “Otherness” Environmental Blog: Can We Blame Cows for Climate Change? →