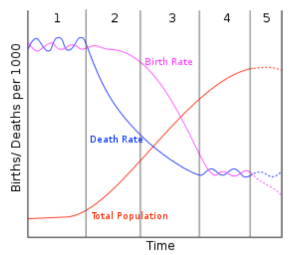 According to the theory of demographic transition, Iran is currently in stage 3, almost 4. This is apparent by its decreased birth rate, improved medical care, and urbanization. However, the leaders are not pleased with this stage. Iran’s supreme leader Ayatollah Ali Khamenei is especially concerned by how the economy might suffer. Therefore, Mr. Khamenei is making it illegal to have permanent birth control procedures such as vasectomies and tubectomies, in an effort to increase birth rates. Although these methods may seem draconian, there is still little to no increase in population. No matter how hard Iran may try, going against a demographic transition is harder than it may seem. This is due in large part to the population momentum created in earlier generations.

As you can see in Figure 2, Iran began stage 1 of their demographic transition in 1960, when there was some population growth. Around 1985, they were in stage 2, at the peak of their growth. The transition from stage 2 to 3 was dramatic. The steep decline in population growth was caused by urbanization, increased education of women, and use of contraceptives, all of which helped to lower birth rates. Iran’s transition was particularly substantial because of the intense efforts at the time to decrease birth rates. This was achieved through promoting the use of contraceptives and increased propaganda to encourage couples to have fewer children.

Figure 3 displays just what Iranian leaders are afraid of. As you can see in this 2013 age structure diagram of Iran, the decline in birth rates has created a smaller generation of young people. If this trend continues, the working class will shrink and the economy will suffer. This decline in birth rates is a common occurrence among other countries at the same stage. Once education improves, people become more interested in their careers. This causes many couples to become less interested in having many children. This is exactly what is happening in Iran. However, the government is making an effort to reverse the trend. They are not only using propaganda and giving incentives to couples that have more children, but they are also passing laws against permanent contraceptives. By both discouraging the use of contraceptives and making permanent birth control procedures illegal, Iran has abused power. It should not have the right to pass a law against these procedures.

Not only is Iran wrong about this law, it is also ill-advised even to try to increase population growth at this stage. There is a reason that growth rate has slowed down. In the late stages of the demographic transition, it is common for families to have an average of two children because it has become more expensive to raise children. Couples would rather focus on giving the best possible education and resources to their two children rather than struggle with 3+ kids. Even the incentives that Iran is using are not working because couples are confident and clear on their decision to have fewer children. Trying to fight the process of demographic transition is not a good way to solve economic problems. It may even exacerbate the issue. Although the economy will suffer if the trend continues, Iran needs find another way to avoid their problems because this solution has a high probability of failure.

Katie Fuller is a VI Form student from Ashland, Massachusetts. She loves science, tennis, and Uhlman’s ice cream. Her favorite season is the winter because she likes to ski.