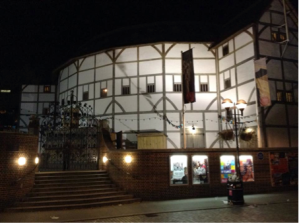 What happens when you bring together 25 passionate, talented, and eager teachers of English and Drama?  What happens when that diverse group of people works nonstop in and around The Globe Theatre — one of the most significant performance spaces on the planet?  You get magic.

The magic comes from the building itself.  Conceived, built, rebuilt, and rebuilt again, the Globe Theatre was the vessel that brought Shakespeare’s genius to the people. Learning its history — and living it and becoming a small part of it — has a way of changing us.

The magic began near Christmas in 1597. On a cold winter’s night William Shakespeare, William Burbage, and others were stealing lumber.  Clandestinely, they had dismembered their Theatre building in Shoreditch (where their Puritan lease-holder prohibited the performance of plays), and now, under the cover of night, they were dragging the wood across the frozen Thames river, to a new location in Bankside — the gritty, disreputable borderland for all kinds of lawlessness and entertainment.  There were bear-baiting rings, pubs and brothels, and within a few months, the Globe Theatre would open. Hard-living workmen and women would pay a penny to stand on the ground below the stage and hear Shakespeare’s plays while well-heeled merchants and members of the court attended the same shows from the galleries above.

Fast forward 350 years.  Inspired after performing in a replica of Shakespeare’s Globe Theatre in Cleveland, Ohio, the American actor and director Sam Wanamaker performed (as we teachers did) a pilgrimage to Bankside.  But all he found there in 1949 was the parking lot of a brewery, where against a wall was affixed a modest plaque commemorating the location where Shakespeare and his company, Lord Chamberlain’s Men (and later The King’s Men in 1603), rebuilt their theater and performed many of his plays.

As we 25 pilgrims learned, Mr. Wanamaker dedicated the rest of his life to the reconstruction of the Globe, and in 1979 his project to “re-member” the previously “dis-membered” theater began in earnest.  Through meticulous research, excavations of the original site, and consultation with scholars and architects, the Globe was reconstructed, according to the principles of design and craftsmanship used in the Elizabethan Era.  The theater opened in 1997, three years after Mr. Wanamaker’s death, and it serves as his legacy.

The 25 of us came to London for the “Teaching Shakespeare Through Performance” program to discover and connect with Shakespeare, and through the Globe, we did that.  More importantly, we  found ourselves connecting with Mr. Wanamaker’s ideal:  to create a center for the authentic performance of Shakespeare and for the universal study of his works.  In addition to attending professional performances in the theater (which were spectacular), we came to understand the degree to which the Globe has become an educational center.  We worked daily with members of the education team, which sees as many as 700 British students from ages 10-18 EVERY DAY of the school year.  That’s well over 50,000 children per year.  We observed lessons delivered to these students, and in the process, we saw how powerful the teaching of Shakespeare — especially in this very special theater — can be.

Constructed to remember Shakespeare and educate the world, The Globe is a building with a beautiful and infinitely generous soul.  As our group’s director Joanne Howarth explained to us before we performed on this stage, the Globe “makes sure that you’ll be OK.”  There’s something about this space, where the actors and the audience share the same light and the same air, breathing together — truly “conspiring” with each other to achieve artistic beauty — that makes actors relax and audiences enjoy.  The Globe instructs us, it informs us, it assures us, and as our movement instructor, Glynn MacDonald, shared with us on our last night, “it changes us.”  It brings together people from all walks of life, inviting actors and audience to share in the banquet of being human.  We joined in this conspiracy when we saw plays there, and afterwards, when we met with the actors in the adjacent bar.  One of my colleagues, who played Cassius in our production, approached Tom McKay, the actor who played Brutus in the Globe’s production.  Here’s how the conversation went:

“Hi.  I saw you in Julius Caesar.  I loved the way you played Brutus.”

“I’m with a group of teachers, and we’re going to perform Julius Caesar, too.  I’m playing Cassius.”

“Could you do my scene with me?”

And so they did.  That teacher will never forget that moment.  I probably won’t, either.

At the culmination of the course, our 25 teacher/pilgrims performed on the Globe stage.  It was midnight.  The theater was empty, save our four directors, members of the Globe Education staff, and a handful of friends and guests.  Absent were the usual sounds of modern life; the helicopters were gone, and stars dotted the sky, visible through the Globe’s infinite roof.  We began our performance, stepping out onto that magical stage, and for a moment, I could see the sunlight greeting the actors.  I felt 1500 people in the audience, 500 on the ground, and a thousand in the seats, and I shared, for a moment, what it must have felt like for Richard Burbage, William Kempe, Henry Condell, and of course, for Shakespeare himself, to play in this theater and share the space with their audience. And they — along with Sam Wanamaker — were there with us. Their spirit breathes on in the soul of this remarkable building, and now we twenty-five teachers have joined them.

By bringing us, 25 teachers and pilgrims, to the Globe, the English Speaking Union has inspired us, directed us, and shown — by brilliant example — the beauty and power that is inherent in Shakespeare’s works and language.  We have shared in the Globe’s theatrical and educational feast, and we bring it back home, to share with our students and our colleagues. The Globe way.

Jeniene Matthews is a member of the English Department. She teaches a popular VI Form elective entitled “Literature on Trial,” which taps into her years of experience as an attorney, and she is the assistant coach of girls’ varsity basketball and head coach of girls’ thirds field hockey. She lives on campus with her husband, Greg, and their son Logan.

By smleo in Season 2, Volume 2.2 on October 7, 2014.
← Making a Difference: The Story of Rebecca Skloot and The Immortal Life of Henrietta Lacks The 15-Minute Lecture By Our Exchange St. Markers →