The Fantastic Books That We Don’t Read in School

Imagine you were Batman, or had the abilities of a great and powerful sorcerer, or a divine being who granted you powers each day.  You could rule the world with this magic, or save it, or grow your hair back.  You could escape your way of life and create a new one.  This is fantasy: a world in which everyone is his or her own hero.  In Berserk, the protagonist, Guts, fights an impossible battle against the god of causality and fate: The Idea of Evil.  It might be difficult to call Guts a traditional hero. He is motivated by rage and hatred and the burning desire for revenge against his former comrade-turned-devil named Griffith.  However, this comrade saved an entire nation and created a safe haven for everyone against the strange monsters roaming the land.  So is Griffith the bad guy?  In fantasy, anything can happen.  The lowliest peasant could become the savior of the universe, or a small hobbit might destroy the One Ring and vanquish all evil.  This is why I love fantasy.  Too often do we read about the history of the United States or the story of a man fighting for civil

rights.  I could never be Nick Carraway, befriending yet hating Jay Gatsby, or Huck Finn, running south for the Ohio River at nights with an escaped slave.  But I can be Drizzt Do’Urden (right), the dark elf fighting against his heritage.  I can be Frodo Baggins carrying the One Ring.  I can be Batman, fighting crime in the alleys of Gotham.  I can be anyone and anything because the rules and regulations of reality no longer apply.

What is true literature?  What makes words on paper into a work of writing, into a group of sentences that flow cohesively into the next?  A few definitions exist: “The body of written works of a language, period, or culture” or “Imaginative or creative writing, especially of recognized artistic value.”  However, no matter how it is defined, the fact remains clear that literature must come, uniquely, from the mind.  As such, all written work is literature.  However, not all literature is contained in books traditionally in a school’s curriculum.  If you look through a list of books commonly read in school, are you going to find novels about magic, elves, dragons, superheroes, or lands far, far away? No, most likely you would never.  If a teacher announced that her class was going to read Harry Potter or A Game of Thrones, that impetus would be squashed by school administrators or parents.  Like those two examples, many other fantasy books have expanded the scope of their respective worlds to a nearly incomprehensible scale.  In parallel to these worlds, their fan base has grown as well.  Worlds with massive followings include The Forgotten Realms, the land of Martin’s A Song of Ice and Fire series, and, of course, Tolkien’s Middle-Earth and beyond, from The Lord of the Rings.

Some of you may not recognize the land of The Forgotten Realms, or any of the novels that take place in them.  The author Ed Greenwood devised a world so massive and most likely more complex than our own planet that no single author could handle it.  Many authors, completely separate from each other, write their own stories about a part of the land Faerûn, or even other planes of existence beyond the physical planet.  Because each author writes a completely separate story, it is not necessary to read every book in the Forgotten Realms.  However, you can more fully immerse yourself in the land by reading the multiple series of the Realms which can show how different interactions between two people or even gods (as gods are very real and very numerous in this world) can affect the events of a series taking place on the other side of the world.  Occasionally there will be a key event in the worlds’ history that will drastically change the face and fate of every living (and nonliving!) inhabitant, usually created by Ed Greenwood, creator of the Forgotten Realms, but not limited to him alone.  One example is the Spellplague, a chaotic event caused by the assassination of the Goddess of Magic by another god, causing a shift in deific powers and altering the world physically and mystically, as magic (of course, real) is impacted by the Goddess’ death.  All of the authors of the Realms write about this event from the perspective of completely diverse characters, even characters who took part in the Spellplague.  The whole event is a coordinated effort to capture the essence of an affair that cannot be written into one book, nor three, nor even seven, but a massive collection of novels, short stories, or even games that relate to one key point in Faerûn’s history.

These pictures from fantasy books have complicated stories behind them, which represent how I view fantasy and its worlds, and allow me to describe the essence and power of fantasy in more than just words. 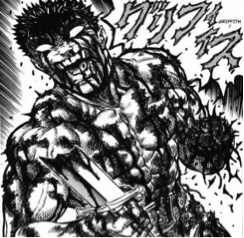 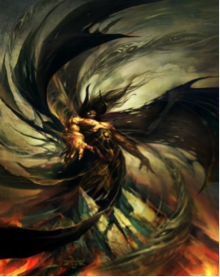 The very first picture is every Japanese comic book I own, also known as manga.  Four different series are present: Naruto by Masashi Kishimoto, Bleach by Tite Kubo, Berserk by Kentaro Miura, and Death Note by Tsugumi Ohba.  Berserk (Guts from this series is in black and white) and Death Note, ongoing and completed series, respectably, are each moderately popular in the United States and Japan.  Naruto and Bleach, however, are part of the unofficial “Big Three”, the three most popular manga in the world, with Naruto claiming the top spot. The picture of the stygian-looking man on ice is Mephistopheles, the Archduke of the Eighth layer of Hell from the world of the aforementioned Forgotten Realms. Lastly, the picture of the creature on fire is Kil’Jaedan, the commander of the Burning Legion from Warcraft.  The Online Role-Playing Game (RPG) World of Warcraft is massively popular and takes place in the world of Azeroth.  Before becoming an online game, however, Warcraft was a strategy game with an extremely intricate and fantastic history. Each picture stems from the fantasy genre and each has a story that could not possibly be explained in a single essay.  Each series has enormous followings of people who interact online and through forums to discuss the intricacies of each world.  These are all indicative of traits that can be intimately tied to this type of story. If I tried to explain the magic of the Berserk world, you might look at me like I am talking about five year old’s make-believe game.  This is why I chose these pictures. They allow for small immersion into a window of the fantasy world.

The fantasy world is a blank canvas.  The creators and authors of a fantasy universe can mold the physics, the geography, the history, and the demographics anyway they want.  However, fantasy does not require an explanation for everything.  There can be gaps and mystery and uncertainty.  In these holes, the readers can insert themselves.  This is how fantasy captures such a large audience.  If one particular fantasy world is not how you imagined it, there are always dozens, if not hundreds, of others waiting to be explored.  Although it sounds childish, fantasy allows for one to become an adventurer in a world where literally anything is possible.  And there is no better way to show this magic, to show this excitement, and to show this infinite amount of adventure than by reading.

And so, it is my desire that, due to the growing popularity of fantasy works such as The Game of Thrones, teachers will begin to realize that good literature does not have to be from stodgy old others who wrote a book a hundred years ago.  Fantasy has before, and will again, capture the attention of intelligent readers.  People crave the fantastical nature of Lord of the Rings and the Harry Potter series.  The books and movies are some of the most popular in the world.  These are types of stories we can read in class.  Imagine instead of debating over what Huck’s journey symbolized, you research which superhero would win in a fight, Iron Man or Captain America?  This is what fantasy has to offer literature, and this is why it should be part of an English curriculum. Either way, I am going to be a read-a-holic, not of a fictional West Egg in this world but rather in the Forgotten Realms of much more interesting worlds.

William D’Angelo is a V Form day student from Medfield, MA.  He plays football, wrestles, and is an avid  reader of cracked.com.