How to Fight Desertification and Reverse Climate Change

Despite feeble statistics demonstrated when viewers hear that “about 2/3 of the world is turning to desert” and fabricated terms like “desertifying”, Savory’s talk still manages to be convincing and inviting. He spins a tale understandable to all and offers a feasible solution to an issue lacking solving strategies. Savory has the audience clinging to his seemingly sublime talk; as it softly escalates, he maintains a powerful stance and one admires his lifelong investment. Interests are piqued because connections are made, but in his quest to streamline, did Savory make it too simple?
Savory begins by defining desertification in layman’s terms as “land that is turning to desert,” which occurs when too much bare ground is created in areas with a drastic wet and dry season. Problems arise when plants from the wet season do not properly decay during the dry season because they lie inert on the ground, preventing growth. When plants decay, they become organic matter and help the soil trap CO2 and water, therefore the absence of decay allows for water runoff and the spread of CO2 into the atmosphere and ozone layer. The solution to this problem, claims Savory, is located in the past. Instead of looking forward he reflects to the lives of herds and natural patterns years ago. He explains how animals previously traveled in tremendous groups for protection. These herds were beneficial for the land because the trampled ground allowed for easier absorption of water and CO2 and animal excrement increased nutrients.
In principal, Savory’s idea of planned grazing and holistic management is one of mimicking earth’s rhythm, and although it shows results, it cannot work everywhere. In order to implement planned grazing, the amount of animals would need to increase. These animals excrete methane, which is a gas harmful to the environment. The plan of holistic management would also create conflict because it is not possible in all locations. In order for survival, the land must be able to accommodate herds and not all “desertifying” locations can (an example would be the Great Basin Desert). Much of the grass here is know as cheatgrass. Cheatgrass grows back at a rapid pace and the grazing cows do not stop its seeding. This grass has too short of a growing season for it to prevent desertification and is invasive and easily spread by the moving herds. In theory, the explanations offered by Savory address desertification concerns, but will only work in specific and optimal conditions. Lack of detail and overarching concepts could lead most viewers to be swayed by his keen spirit and idealism, but science does not change for hope–only fact. While Savory advances the abolition ofdesertification, it is certainly far from over. Savory has spent a lifetime probing for solutions, but in order to solve this globally, others will need to stand on his shoulders and continue searching for answers.
Torie Shakespeare is a Vth Form day student from Southborough, MA.  She enjoys reading, writing, and music, and she cooks on her days off.
***********
TED Talk-Dickson Despommier: The Vertical Farm                                                                                                         Reviewed By Camille Banson
Ever since farming was invented, people have been clearing forests at an immense rate to sustain the food supply for humans. In fact, our agricultural footprint is the size of the entirety of South America. With a predicted increase in population to 10 billion, deforestation will continue and eventually humans will run into several problems concerning the horizontal farming method. Dickson Despommier, the Emeritus Professor of Public Health and Microbiology at Columbia University, developed a solution to this pressing problem: vertical farming.
Vertical farming is a promising solution that resolves the demand for food, conserves land, renews urban environment, produces year-round, safe and varied food, and repairs destroyed ecosystems. One acre of vertical farming yields the same amount of crops as 10-20acres of horizontal farming, resulting in a decrease of deforestation. Fresh food will be available to urban areas because abandon city properties can be used for vertical farming. Since the growing of crops will be indoors, production of safe and varied food can happen year-round.Also, vertical farming has environmental benefits. The horizontal farming plots that are used now can return to its natural state. Because the water in vertical farming will be recycled down each level, there will be no agricultural run off, which is the biggest source of pollution on the planet. Vertical farming will use 70% less fresh water than horizontal farming does. Humans benefit from vertical farming by increased efficiency of production, availability of food, and creation of jobs, and the environment benefits from this method by restoring ecosystems lost due to deforestation. This is the future of agriculture, the environment, and humans.
Vertical farming will change the way people acquire food, revive our planet’s health, and promote symbiotic living between humans and the environment. If you care about the future of our ecosystems, agriculture, or food and are interested in how vertical farming buildings would look and why it has not taken off by now, you should watch this TED talk.
Camille Banson is a day student from Hopkinton and is in the V Form. She enjoys traveling, writing, and listening to music.
***********

Our blue marble is slowly being poisoned by fumes of our generation; suffocation is inevitable…unless 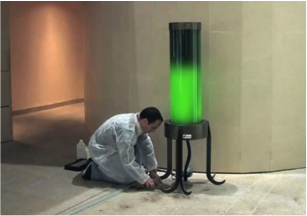 something else is done. Back in September 2013, French Bio-Chemist and aquaculture pioneer, Pierre Calleja, noticed this problem and strived to fix the problem. In his TED talk in Lausanne, Switzerland, he presented to the audience his answer to the problem… the Algae Lamp.

Since childhood, Calleja was fascinated with aquaculture and life out in the sea. As he slowly blossomed into an intelligent and creative scientist, he experimented until he found the enormous potential of micro-algae to reduce the greenhouse gas effect. With the micro-algae, he envisioned a means of creating a mutual relationship between the algae organism and humans. This watery-glass-tube lamp that Pierre created not only provides emission free light, but, when placed in populated areas, also rids the area of harmful carbon dioxide. This innovative product utilizes the algae’s natural ability to complete photosynthesis. The micro-algae use the carbon dioxide that we emit. Compared to a 50-year old elm tree that takes in about 123 pounds of carbon dioxide, the micro-algae are able to absorb about a ton of carbon dioxide per year. The lamp essentially takes the byproducts of burning fossil fuels, humans’ exhalation, and our use of machines to produce oxygen and also provide light behind a curtain of algae.

This talk was inspiring and enlightening. Seeing this invention in our streets is most likely imminent and getting aboard upon this idea now would expedite its existence in the future, especially since our future is projected to have a greater yield of greenhouse gases such as carbon dioxide. However if one were to need this lamp in dark area with no sunlight, such as a parking garage, how would the micro-algae survive in that environment? Also, since the light used inside the lamp is only used as a means to lighten an area, if that light were say, a fluorescent light, would it not only produce light but also a means for the algae to grow? Would that not be helpful not only to us but also the plant? And in a picky manner…is there a way of changing the light from green to a different color?

Jonathan Qu is a Vth Former from Wayland, MA, and he lives in Coe House. He enjoys spending time with his family, reading, and experimenting with the piano.

By smleo in 2013 - 14 Academic Year, Volume 8 on January 28, 2014.
← Why You Should Study or Take Anthropology! Crystallographic Restriction Theorem and Molecular Symmetry →