Gone Fishin’…It’s Not What You Think

The stadium rumbles with the cheers of FIRST teams, mentors, and parents. If you were thinking stereotypically, you would not expect to find this much excitement at a competition “For Inspiration and Recognition of Science and Technology” (FIRST), but the energy in the stadium is palpable. “Coming all the way from Southborough, Massachusetts, it’s Goooone Fishin’!” the announcer in the cowboy hat bellows over the rising tide of cheers. My teammates and I jump up and add our voices to the chorus of yells reaching the top of America’s Center Convention Complex in St. Louis. Sitting down reluctantly, we watch with a mixture of excitement and anxiety as the airhorn sounds and the next match of Rebound Rumble, 2011-2012’s basketball themed game, unfolds.

Gone Fishin’ is St. Mark’s School’s FIRST Robotics team, Team 3566. In a small room under the PAC, Gone Fishin’ had its beginnings in 2010-2011. During their winter sports season, a dedicated band of pioneering St. Markers and faculty members built Bernard, Team 3566’s first robot, and Ducky, Bernard’s minibot companion. In the 2011 games, “Logomotion,” Bernard used its launching mechanism to hang triangle, circle, and square Ubertubes onto pegs. However, the 2011 team focused mainly on the minibot portion of the competition: at the end of the match, robots deployed minibots to race up poles. Using a magnetic strip belt, Ducky quickly climbed, winning Gone Fishin’ many points. The team’s success during its first competition earned it the Highest Rookie Seed and Rookie Inspiration Awards as well as a spot in the 2011-2012 FIRST Robotics World Championship.

I joined robotics during the team’s second year, and the game for that year, “Rebound Rumble,” was a basketball-based competition where robots shot foam basketballs. Initially, our team was considering a design similar to a baseball pitching machine with two spinning wheels that would launch basketballs. However, after considering various design options, our team settled on a catapult-based idea because of the increased accuracy of the design. We were one of the only teams at the regional and championship competitions to build a catapult shooter. “Ultimate Ascent” was the 2012-2013 game in which robots threw Frisbees into slots to win points. For this challenge, our team built AVA, a Frisbee launching robot with enough power to launch a Frisbee the full length of the court.

I remember both my curiosity and my ignorance when I first entered the Robotics Lab. I had no idea what the machines in the lab were used for, and I had even less of an vision about how I could be helpful in such a complicated place. However, I soon overcame my apprehension thanks in part to the chemistry of the team and in part to the support of our adult mentors. All four Forms are represented in Team 3566, and we have almost an equal number of boys and girls. The team members’ different backgrounds converge in the Robotics Lab to create an environment where many perspectives cooperate to tackle the challenges posed by the FIRST competition each year. Faculty mentors Mrs. Brown, Mr. Roche, Mr. Wells, and Mr. Battis invest time and energy providing guidance for the team, even during weekends and late evenings. The adult volunteers who work for companies such as Bose and Raytheon bring talents and knowledge specific to their jobs and key to our success, demonstrating how the skills that we are developing through our participation in FIRST Robotics can be used in future careers.

In addition to our teachers and mentors, the grants and gifts we receive from companies, parents, and interested parties have immensely helped our team. St. Mark’s covers some costs, but an important part of FIRST is allowing student team members to gain experience in external affairs: writing grants, making phone calls, and increasing others’ involvement and investment in the success of our team. Our team applied for and received a NASA grant during our first year as a Rookie as well as Raytheon grants for the past three years. Additionally, we recently received a large anonymous gift that will provide CAD training for our whole team, a new pit, and additional tools. CAD is a computer program used to design and test parts before they are physically built, and CAD proficiency will save our team time and energy because we can perfect each part of the robot before we begin machining it. A new pit will increase our efficiency at competitions. At every competition, each team is assigned a space of around 150 square feet called that team’s ‘pit area.’ The entire team and its tools, robot, and robot parts must fit inside this space, making organization key to success in FIRST competitions. More tools will provide Gone Fishin’ with the means to construct a more sophisticated robot.

The value of FIRST Robotics lies in its combined emphasis on learning and applying STEM-related skills. Proficiency in math and science is important, but being able to use this knowledge is more significant of an accomplishment than simply memorizing textbooks of material. The FIRST Robotics program pushes students beyond what they learn in their classes to apply their knowledge in creative ways, and this experience in ‘thinking,’ not simply memorizing, is an essential skill for success in all fields.

Melissa Kok is a VI Former from Houston, Texas, and she is currently a prefect in Pine/Oak House. She lived for eight years overseas in Dhahran, Saudi Arabia, and she enjoys reading books and baking during summer break. 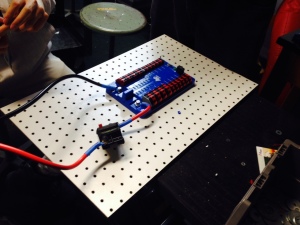