together you are going to create an infographic that makes a comparison between the refugee crisis during and after the second world war and the current crisis in 2016. You may identify some guiding questions of your own. END_OF_DOCUMENT_TOKEN_TO_BE_REPLACED

A nation does not need to have a large number of members or consist of one piece of land. A nation is a group of people that are connected to each other because there is something that unites them, such as a common leader or government.

Different nations can be defined by politics. Politically, a nation is a group of people that live in the same certain country, follow the government of said country, and live together as a community. In politics, a nation is a country’s land and all that is in it. However, different types of nations can share something in common that is unrelated to politics. This is like a music artist who has a nation of fans because those fans are brought together by something they all have in common: a love for the performer. END_OF_DOCUMENT_TOKEN_TO_BE_REPLACED

Much like hip hop music, modern day United States culture is based upon movements for change and the spread of continental ideas.

Hip hop was born in the seventies, and first originated in New York City. The genre was developed largely by African-Americans, but evolved to incorporate nuances from other minority groups such as Latin-Americans. Today, hip hop is a multi-billion dollar franchise that has become a symbol of United States culture because it exemplifies a diverse and influential community that seeks to spread tendentious ideas. Artists like Common, Nelly, Macklemore, and LL Cool J use their prominence in the hip hop genre to address today’s issues. Macklemore did this recently in his song “Same Love,” advocating for marriage equality while producing a track that made the top charts in America. END_OF_DOCUMENT_TOKEN_TO_BE_REPLACED

China and Tibet have a long history of relations. Beginning with the Manchu rule of Tibet, conflicts and disputes between the Chinese and Tibetans have persisted. Unwilling to compromise with a centralized ruler, Tibet seized the opportunity to claim itself as an independent state after the overthrow of the Qing Dynasty. However, following the establishment of the People’s Republic of China in 1949, Tibet became an integral part of China. From then on, numerous riots and uprisings for Tibetan independence and the preservation of Tibetan traditional culture and religion have taken place (Goldstein 84-86).

One aspect of the complex relationship between China and Tibet has some connection with the Dalai Lama selection process. As a tradition of Tibetan Buddhism, Finding the reincarnation of the Dalai END_OF_DOCUMENT_TOKEN_TO_BE_REPLACED

The Sri Lanka summer trip (click here for scrapbook!) was offered as one of the St. Mark’s global citizenship travel opportunities 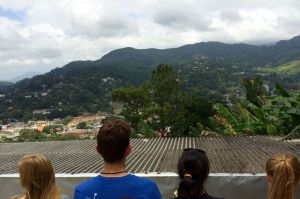 supported by Envoys, a liaison program that seeks to educate students about the world through exposure and hands-on experiences in different countries and cultures. The St. Markers who participated in the trip applied through the St. Mark’s global citizenship program. Our days in Sri Lanka were unique in many senses. Not only were we given a wonderful travel and learning opportunity to engage in the culture and environment of Sri Lanka, but we also got the chance to partner with an educational non-profit organization called Educate Lanka. Educate Lanka provides students in Sri Lanka with scholarships by matching each student with a sponsor. By the end of the trip, we were able END_OF_DOCUMENT_TOKEN_TO_BE_REPLACED