Editor’s Note: These reflections and recordings come from the winter St. Mark’s Saturdays course, “Songwriting and Recording.” The course, taught by Mr. Jason Eslick, covers songwriting and composition in electronic and acoustic mediums while getting students started with the art of recording and production. Students worked to come up with a recorded, mixed, and mastered final project. 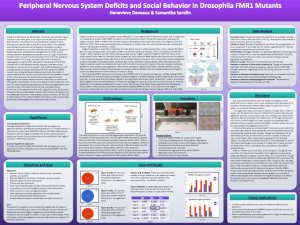 Fragile X syndrome is a genetic disorder caused by a trinucleotide repeat mutation in the FMR1 gene, occurring in one in 4,000 males and one in 8,000 females. The syndrome is characterized by a variety of social, learning, and cognitive deficits specific to each patient. The pathways surrounding the expression of the fragile X phenotype are largely unknown, and there is no current treatment for the disorder. Numerous studies have been conducted to investigate the role of the central nervous system in developmental disorders such as Fragile X Syndrome; however, there is a lack of studies focusing on the role of the peripheral nervous system. In our study, we developed a line of Drosophila melanogaster, using the GAL4-UAS system, that expresses the dFMR1 mutation only in the olfactory sensory neurons, a vital part of the Drosophila’s peripheral nervous system. We conducted aggression and courtship assays to test the social behavior of the peripheral dFMR1 mutants. We compared these behavioral results with the results of control wild-type flies and with Drosophila that have the dFMR1 mutation in their entire anatomy. Our preliminary results suggest that both aggression and courtship should be further researched, as it was found that specific characteristics of each social behavior were impaired in some way. The most noteworthy data that was collected was significantly lower courtship index in the experimental line and a complete lack of dominance of the experimental line in the aggression assay. Because the Drosophila that were genetically crossed using the GAL4-UAS system had the dFMR1 gene silenced in their olfactory sensory neurons, the flies had an abnormality in their ability to detect pheromones, which studies show are the basis of Drosophila social interaction and behavior. END_OF_DOCUMENT_TOKEN_TO_BE_REPLACED

To the 2017 Graduates of Elite High Schools

To the 2017 Graduates of Elite High Schools

For seniors, graduation is approaching us faster than we think. In addition to celebrating the payoff of our hard work, our departure from elite schools, particularly independent schools, also means we are about to enter the society that it has sheltered us from. This society is not very friendly and accepting. Truth be told, it has never been this divisive since the Vietnam War and never this irrational since the Red Terror. Disagreement escalates into hatred, frenziness replaces reason, and worst of all, we as a society struggle to find a common moral standard.

In such circumstance, people criticize the elites of our society, blasting them for not caring about voices of general public, being selfish in their decisions, and to sum up, causing all the social disorders from their high ground in Capitol Hill, Wall Street, and Silicon Valley. Secretary Clinton calls “Wall Street Elites” a threat to the “Main Street” for ordinary American people. And, President Trump criticizes the rigged political system since the first day of his campaign. These voices have definitely raised society’s hatred toward elites. And the US is definitely not alone in this case. Back in my hometown, Beijing, it’s impossible to get a taxi ride without hearing the driver complaining how his livelihood is ruined by selfish elites. In my second hometown, Hong Kong, tens of thousands of anti-establishment protesters set up camps on the main street of Hong Kong island, right outside my dad’s office building. Because of that, by the way, he was forced to walk 30 minutes everyday to work. Surrounded by nothing but bad news, he was somewhat reassured by losing some weight. All in all, there are different causes behind these people’s discontent, but the common ground is that they attribute the wrongs of our society to the failure of elite leadership. END_OF_DOCUMENT_TOKEN_TO_BE_REPLACED

Own Your Weirdness, Ditch the Finsta

Own Your Weirdness, Ditch the Finsta

Fake Instagram accounts, more commonly referred to as “Finstas,” have gained a tremendous amount of traction in the past three years. The creation of these additional Instagram accounts has allowed an opportunity for people to post funny or embarrassing photos of themselves and established a community where people can express their more ”unfiltered” self, which is ironic considering the name of this new phenomenon has the word fake in it. Although this mentality of being openly genuine on social media sounds ideal, there are enough flaws to make me anti-Finstas.

It is unfortunate that we feel this pressure from society to put on a mask so that our peers, friends, family, and even strangers do not judge us based on our social media aesthetic. I find it discomforting that this pressure is so powerful that it’s difficult for us to rise above these opinions and post what we want on our real Instagrams (or “Rinstas”). The invention of Finstas has created an escape to ignore the actual problem, not solve it. It gives users an alternate reality to express their true selves only to a small group of people, instead of most of their acquaintances. I agree that progress is better than nothing, but I don’t actually think it is long-term progress. END_OF_DOCUMENT_TOKEN_TO_BE_REPLACED

When Mr. Calagione, our varsity baseball coach, first mentioned the prospect of visiting Cuba in the spring of 2017, I was dubious. Although President Obama had shown signs of improving diplomatic relations with Cuba in 2014, I had believed that American travel to Cuba would have to wait several years. The opportunity to immerse myself in the culture of Cuba, a country impoverished by many regimes of cruel dictators and gripped by the historical intervention of the United States and the Soviet Union, intrigued me. I never considered Mr. Calagione’s idea to visit Cuba as a realistic proposal. It was not until he gathered all members of the baseball team in October that the prospect of visiting Cuba became legitimate. The appearance of the word “Cuba” on that piece of paper immediately enlivened me. While I looked forward to playing baseball, enjoying the warm weather, and interacting with locals using my Spanish, the learning aspect of the trip was what excited me the most. The historical context of Cuba from colonialism to the revolution created a unique social, cultural, and political landscape that I was excited to learn about. My eagerness to learn about the livelihoods of those with different social and cultural backgrounds often drove me to engage in what I call “research frenzies”: the hectic act of researching a topic of interest by delving into articles, videos, and photos on the internet using more than thirty tabs. This was often a time consuming (and battery consuming) endeavor that acted in place of actual traveling, and it fulfilled my desire to learn about other cultures. I would always choose travel over feverishly scouring the internet, so the opportunity to visit Cuba for a week energized me. END_OF_DOCUMENT_TOKEN_TO_BE_REPLACED

Artifact of Learning: What Is Cancer?

Artifact of Learning: What Is Cancer?

Editor’s Note: This video is from the following assignment in Advanced Biology—

Charge:  Create an Artifact of Learning* that will clearly explain to someone not in this class: What is Cancer? And How Does it Arise? Your artifact should synthesize the content from this unit (DNA Structure & Replication, The Cell Cycle, Mitosis & Cytokinesis, and Control of the Cell Cycle), as well as integrate new information that you have researched to better make sense of this disease.  Your answer should not be a review of EVERYTHING examined; rather you should selectively integrate elements of each topic that help to explain what cancer is and how it arises. Note:  This assignment does not ask – how do we treat cancer, detect cancer, prevent cancer, etc.  Simply – What is Cancer?

*Scroll to bottom for definition of an “Artifact of Learning” END_OF_DOCUMENT_TOKEN_TO_BE_REPLACED