December 4, 2018 9:55 am / 1 Comment on Archaeological Excavation with Dorchester-On-Thames Field School

I spent the first two weeks of last summer rummaging through a 2000-year-old garbage
heap, and it was great! Let me explain:

I plan to pursue archaeology in college and potentially as a career. Archaeology programs in the United States are rare 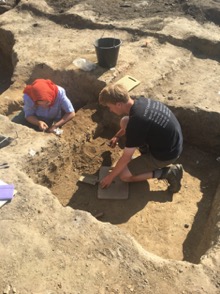 and focus mainly on research topics within North and South America. For a broader archaeological education, I plan to head across the pond to the United Kingdom or Ireland, and in order to gain an advantage in the application process, as well as out of sheer interest in the field, I applied for the Mathews Fund Grant in order to take part in an excavation. The dig was put on by a company based in Oxfordshire, England, and focused on a tiny village just outside of Oxford called Dorchester-on-Thames. During Roman times, the village was the site of a Roman settlement. This particular excavation had been used for a number of years as a field school for university students, and I was lucky enough to get a spot. I was the only high school student there. I expected to be on the lower end of the age spectrum, but I had not been prepared for the fact that most of my fellow attendees would know each other already. After schlepping my backpack from Birmingham Airport to Oxford, finding a bus to a tiny village, and walking to the cowpaddy turned campsite, I was exhausted. As I set up my tent, the other members of the dig greeted their friends. After an hour of settling in, we were asked what we would prefer for dinner that evening. The choices were a Sunday roast, and the ever stereotypical English delicacy known commonly as fish and chips. I opted for the latter, and fantasized about the impending meal as we were given an exhaustive tour of the village which comprised an abbey, three pubs, and a Co-Op. END_OF_DOCUMENT_TOKEN_TO_BE_REPLACED

Getting My Hands Dirtier Than Expected

Getting My Hands Dirtier Than Expected

“What will your students think when you tell them that you spent the summer in the toilet!” Quivering with hoarse laughter, Tony slapped his knee and grinned from underneath the visor of his white construction worker’s helmet. He posed, one foot planted up against the trench wall, one hand on his hip. In his other hand he gingerly twirled his “specialty tool,” the head of an archaeological pick superimposed on the longer handle of a garden tool. He and a fellow volunteer archaeologist at Binchester had designed this tool in the off-season, the perfect instrument for this dirty job.

END_OF_DOCUMENT_TOKEN_TO_BE_REPLACED

Getting My Hands Dirty Again

This summer, I will fulfill a promise that I made to myself eight years ago.  In the summer of 2006, I spent a

season excavating at the site of a first-century Roman farmhouse outside of Lucca, Italy. I loved every moment of that summer, and upon the conclusion of the excavation, I promised myself that once I completed my undergraduate studies, found a job, saved some money, and earned my graduate degree, I would go back to digging. This summer, I am returning to the field, the archaeological field, that is. END_OF_DOCUMENT_TOKEN_TO_BE_REPLACED