You train three times a week all year. You go to the gym, do the beep test, and run three miles all to prepare for four days of games. You’ve put in work all year, almost 15 hours a week to prepare to play 360 minutes of perfect soccer in four days. Most people would never think of doing something as demanding as this; they might even call it crazy. However, to me this is one of the most exciting times of the year: the US Youth Soccer National Championships. Yes, you miss fun things throughout the year like hanging out with friends on “days off”, not being able to ask anyone to the Sadie’s dance because you have a tournament in Virginia, and people deciding that you don’t want to be invited because, “You always have soccer.” Saying “Sorry, I can’t go, I have soccer” at least 100 times a year gets annoying, but the feeling as the final whistle blows in the final game and knowing that you just became a national champion is worth the travails.

You shake hands with the other team. You take a picture in front of the net. Everything is rushing around you. You feel something, but you don’t know if it’s real or just a dream, because you’ve dreamed about this moment so often. The tournament directors come get you to bring you to the stage in the middle of the 120 field soccer complex. You walk with your team through crowds of people who give you weird looks of excitement and awe, and you start to feel something well up inside of you, but you decide to keep quiet and walk on. You get to the stage and there are photographers and excited parents, and you wonder why they’re so interested in you. A man comes up to you holding a medal; you put your head through the loop and wonder for a second what it says. It reads, “National Cup IV Champions.” You barely have time to process what you just read before they call “NEFC U16 girls” to the stage. The crowd of spectators erupts, and you walk onto the stage with your teammates. You arrange yourselves for the picture and smile. You try to look at all of the cameras, but there are just too many. As you exit the stage, the feelings rush towards you, and you hold on to the girl next to you as you realize what you’ve done. Not only did all of the hard work pay off, but unlike all of the other tournaments that you’ve played in over the many years–this tournament is different. The feeling is hard to describe because it is a mixture of so many things. You’re happy because you just won the biggest tournament in the nation; you’re excited because after a week of staying in a hotel, you finally get to fly home; you’re high off of the rush that just hit you because the voice in your head is screaming, “YOU’RE A NATIONAL CHAMPION!”

When I tell people that I’ve won a national championship they think about how cool it must’ve been, and how exciting that day was. However, it wasn’t just that day that led me to being a champion. It wasn’t a pleasant process getting to that point. What led me to becoming a champion was the hard work and dedication that led to that one day, that one moment. The hours I spent churning away, the nights I had to stay up until 1 a.m. trying to finish my homework and keep up with school because of my soccer schedule, and the weeks where I had no day off because I had games on Sundays–the one day everyone else gets off. All of these things are often times overlooked. The amount of times where I did all of the hard work to no avail is astounding. In the end I didn’t do all the work for 11 months out of the year in hopes of winning a national championship. Lucky for me I did all of this work, and it helped me become a back to back, 2x national champion.

Dedication isn’t just showing up to practice and going through the motions half heartedly. It’s showing up and pushing yourself until you make mistakes and are doing something so hard that you feel uncomfortable. In these moments, you are truly becoming better. In the gym you don’t just show up. You work with your trainers on a specialized weight plan that targets the muscles that you use the most; when you’re sore the next day, though, your idea of an off day is an easy three mile jog. None of these things are required, of course, but when you know your teammates are depending on you, so you do it anyway. It’s an unspoken on my team that you don’t just show up to practice twice a week and that’s your only workout. Most of the girls on my team are doing the same workouts that I’m doing. In order to be a good team, you need to have trust in each other. You’re almost like sisters. I was told one time that if you’re not singing High School Musical songs with your team during warmups than you’re actually not a team at all.

In my many years playing competitive soccer, I’ve learned to hold myself accountable: not only for getting work done for school, or keeping a decent social life, but also for getting work done on the field and doing my job for my teammates. I’ve learned how to have a strong work ethic and how to be relentless because people don’t always think you’re as good as you think you are. I’ve learned how to be proud and hard on myself at the same time, and I’ve learned that no matter what I may be doing I’m always part of something bigger than myself and that’s the motivation I need to push on. 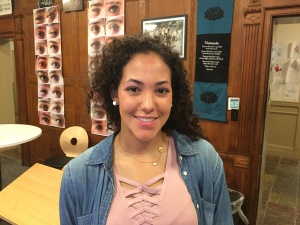 Hailey DuBose is a VI Form boarding student from Raynham, MA. She is captain of the varsity basketball and soccer teams, and in her free time she enjoys hanging out with her friends.