Rising liberal ideologies in the early nineteenth century caused a split of the more liberal beliefs of Unitarians from the conservative, orthodox beliefs of the Congregationalists. This separation occurred slowly, but gradually, throughout New England. When the majority of a church congregation preferred Unitarian beliefs to those of the Congregationalists, the parish converted to Unitarianism.[1] The most influential driving force of this split was William Ellery Channing’s book, Unitarian Christianity, which has become known as the “Unitarian Manifesto.”[2] Unitarian Christianity proclaimed many of the beliefs that caused the Unitarian sect to break from the Congregationalists. While the Congregationalists believed in the idea that Jesus, God, and the Holy Spirit were all the same entity, the Unitarians believed that Jesus was not God.[3] Unitarians also rejected predestination, which asserts that God determines a person’s salvation before birth.[4] His book was a result of many movements and rising liberal ideologies of the time such as the Enlightenment, Scientific Revolution, and Great Awakening. One church that this separation greatly influenced was the Pilgrim Church in Southborough, Massachusetts.

Before Unitarianism was spreading across in the United States, it had been prominent in England. In 1774, the Unitarian Church of London formed. This older, English form of Unitarianism held many of the same beliefs as that of the future American version, including the rejection of predestination and instead promoted “insistence on salvation by character.”[5] The driving force for the split, like what would later happen in the United States (U.S.), was the difference between the orthodox Trinitarians, who believed in the father, the son, and the Holy Ghost, and the Unitarian belief that Jesus was a prophet of God, but not God himself. Much like in the American Unitarians, these beliefs originated within the Enlightenment. This English Unitarianism was a precursor to that of the American Unitarianism.[6]

The first Unitarian Church in the U.S. was the King’s Chapel in Boston, Massachusetts. Originally an Episcopal Church, the chapel converted in 1785 due the rising liberal ideologies.[7] This transfer of power was representative of moving away from the old English traditions, as a new American society did not want to  attend religious sermons in a church with an allegiance to the King of England.[8] This push for a less English and more American way of life was characteristic of the period after 1776.[9] The American Revolution brought with it not only a war, but also revolutionary, liberal ideas. A new majority of Unitarian, liberal beliefs caused a shift in the congregation of the King Chapel, much like what would happen with the Pilgrim Church in Southborough.[10]

One way in which this new sect spread was through English influences and influential American leaders. John Priestly and William Hazlitt both were prominent figures in the formation and spread of English Unitarianism.[11] Each of these men had colonies, and thus influence, in the New World. Priestly spent ten years spreading his Unitarian ideas in his Pennsylvanian colony.[12] Many famous U.S. Presidents, while they did not formally practice Unitarianism, shared liberal Unitarian beliefs, such as John Adams, Thomas Jefferson, James Madison, and John Quincy Adams. Each “questioned the orthodox Christianity of their ages.”[13] These presidents definitely played a role in Unitarian values spreading throughout New England, as well as the United States.

The main reason for the split was a difference in beliefs. One key point of contention was the orthodox Congregationalist belief of predestination, in which the individual has no control over his or her salvation. In this belief, God has already decided a person’s fate before he or she is born. With this concept, one would need to demonstrate that he or she was “elect” and had been chosen by God to be saved in order to join a congregation.[14] However, in the midst of the American Enlightenment, new liberal thinkers rejected this belief. A reoccurring theme in the Enlightenment was the stress on the work and value of each individual.[15]

This movement, and especially the Enlightenment philosopher John Locke, heavily influenced the Declaration of Independence. The document states, “We hold these truths to be self-evident, that all men are created equal, that they are endowed by their Creator with certain unalienable Rights, that among these are Life, Liberty and the pursuit of Happiness”[16] According to these liberal thinkers, if every person has a right to pursue his or her own happiness, then the notion of predestination is invalid. No longer is God in control of the individual’s destiny, according to this philosophy, the individual is in charge or his or her own destiny. Instead of God predetermining salvation, the new belief was “salvation by character. ”[17] This new, more liberal thinking is what began the crack that caused the schism between Congregationalism and Unitarianism. The Unitarians took up this new liberalism, while the Congregationalists held true to the orthodox ways.

The other key difference in belief, which was the main reason for the split between the Unitarians and Congregationalists, was the belief in the Holy Trinity. The Holy Trinity, also known as the Father, the Son, and the Holy Ghost, claims that Jesus and God are one. The Scientific Revolution had reached the United States, with it came a tendency to rationalize thought.[18] This religious idea of three as one was no longer a concept that seemed scientifically plausible. The new Unitarian belief was that Jesus and God were not one. They were connected, however, they were not the same entity.[19] Instead the belief that Jesus was a prophet of God was more logical to the rising Unitarians.

All of this change within the church did not come without a backlash. An orthodox seminary or divinity school was formed at Yale University in New Haven, Connecticut in 1834.[26] This was to create a “center of orthodoxy,” and to perpetuate the conservative beliefs of the Congregationalists.[27] As a reaction to all of the new liberal ideology, many traditional Congregationalists founded religious bases such as this one. There were also conservative reactions around Boston. In Dedham, Massachusetts, a parish appointed a Unitarian minister, and many church members claimed the vote was skewed because not enough Trinitarians were included in the vote to represent the community. In 1820 the dispute was brought to trial, but the Unitarian minister remained. The court stated the ruling was based on political ground, as opposed to religious ground. This meant that because the minister was appointed legally, he stayed.[28] It was not because the court had any religious affiliation.[29] Even within the region, there were examples of these conflicting belief systems.

In the case of the Pilgrim Church in Southborough, it was due to these differences in beliefs that a separate entity within the Church, “the Pilgrim Evangelical Society,” formed. The split developed as “a division of the Parish Church into what we would now call Unitarian and Trinitarian congregations.”[30] The Pilgrim Evangelical Society held many of the same beliefs as those that were spreading throughout New England, such as the rejection of predestination and the Holy Trinity. Part of the mission statement of the society was, “We will drop our separate existence whenever the old Society will agree to have the Gospel faithfully preached according to our understanding of it.”[31] This new society split off in order to be able to preach in the new, liberal way in which it interpreted the Gospel. Its members would only return if they were able to preach to their liking.

Important leaders, such as the Southborough-born theologian, Jerboam Parker, highlighted the differences in beliefs within the Church and perpetuated the split.[32] The ideological movements of his time greatly influenced him. Parker gave many Unitarian based sermons in the Pilgrim Church that created a divide between the more liberal members, which drove them to create the Pilgrim Evangelical Society, and the more conservative Congregationalists. This was similar to how leaders in the U.S. influenced and spread Unitarian philosophy, which caused many parishes to separate from the orthodox Congregationalists.

The Pilgrim Evangelical Society later took over the building that is now standing in the place of the Pilgrim Congregational Church of Christ. In line with the trend in equality of religion during the Second Great Awakening, in 1847, the “Ladies Domestic Missionary Society of Pilgrim Church” formed. Though many of their duties were domestic such as cooking and cleaning, women were able to participate in religion, even in a small way, which was a relatively new concept.[33]

This split within the Church created a divide among the community, much like how there were reactions to Unitarianism within New England.  As stated in A History of Middlesex South Conference of Congregational Churches and Ministers, “some of the saddest things in connection with these divisions between Unitarians and Trinitarians were the sundering of long-standing relations…houses were divided, fathers and sons could not see things through the same standpoint, and daughters rose up against their mothers.”[34] This difference in beliefs was a separation between generations within the community and well as on a larger scale, throughout New England.

Rising liberal ideologies due to the Enlightenment, Scientific Revolution, and Second Great Awakening created tensions within the Congregationalist Church, which eventually led to the schism. Unitarians took on newer beliefs, while many Congregationalists held on to older, more orthodox beliefs, such as predestination and the Holy Trinity. Pilgrim Church was no exception. The same difference in beliefs caused the formation of the Pilgrim Evangelical Society from the Pilgrim Church and forced the two to split, though they did eventually rejoin with the more liberal beliefs of the Society.

Payton Nugent is a VI former from Bellingham, MA. As well as a passionate LGBT 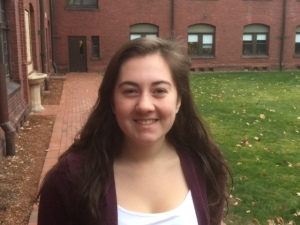 [8] Episcopalianism is a sect of the Anglicanism, of which the King of England is the head.

[16] “Declaration of Independence,” The Charters of Freedom, accessed December 7, 2015, http://www.archives.gov/exhibits/charters/declaration_transcript.html.