Home » Season 3 » The Transition to Adulthood at Age 14

The Transition to Adulthood at Age 14

The Transition to Adulthood at Age 14

In September 2012, I started my freshman year just as my father took a job in Shanghai. One month later, during my mother’s annual checkup, her doctor discovered precancerous cells in her breasts and ovaries. My father was forced to rush back to the States as my mother underwent two surgeries, which left her on bed-rest for nearly two months. My father, the only source of income for our family, needed to return to Shanghai. Sitting down with me right before his flight, he solemnly asked, “Can you help me take care of your mother and your brother?” I was nervous about the prospect, but I gave him my most winning smile, promising, “Of course I can.”

I soon realized that making that promise was easier said than done. All of a sudden, I was responsible not only for myself, but also for the well-being of both my mother and younger brother. I had new obligations that, at first, seemed like foreign concepts. I did not know that meat took a longer time to cook than vegetables, so my first dinner resulted in overcooked vegetables and raw pork. Remembering the promise I made to my father, however, I tried again. Instead of attempting to solve everything on my own, I researched different recipes and meals and incorporated advice from my mother.

Just as I foolishly began to believe that I had everything under control, life threw me yet another curveball. In February of 2013, two massive oak trees from a neighboring yard fell into ours, demolishing the shed and swing set, and taking shingles from the roof. I was informed that, according to Massachusetts’ law, the trees were now my responsibility.

With my father still in China and English being my mother’s second language, it was up to me to communicate with our insurance company. I was nervous the first time I dialed the insurance company’s number, and I felt unsure and young as I talked to the agent. I could hear the doubt in his voice when he realized he was speaking to a 14-year-old girl, but once he realized my capabilities and resolve to fix the mess, that hesitation changed to appreciation.

The first step was to remove the tree. I needed to find the best quote for the tree removal and to consider when service could occur and what equipment was necessary, as our driveway was too narrow to fit the standard removal truck. It took several attempts at contacting different companies before I finally found a suitable one. After the tree was removed from the yard, it was a long process of negotiating prices, replacing demolished objects, and returning our yard back to its original state.

Freshman year ended positively, and my mother’s health returned. My transition towards adulthood continued as my mother and brother traveled to Shanghai to join my father, and I transferred to a boarding school. My experiences that year allowed me a glimpse into adulthood and the attendant responsibilities, teaching me the valuable skills of adapting to new situations, communicating and negotiating confidently, and managing and resolving difficulties. From this experience, I have become more independent with a greater appreciation for my parents. Although unfortunate, ultimately the difficulties of freshman year accelerated my maturity and assisted in my transition to adulthood. 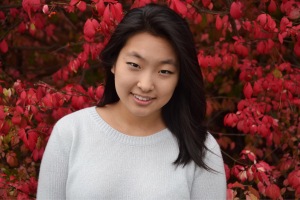 Cynthia Yang is a VI Former from Reading, MA.

By smleo in Season 3, Vol 3.4 on November 10, 2015.
← Connection By Pride: JeJu Island to St. Mark’s Exchange Get Educated on the Syrian Conflict: Three Perspectives →